When you jailbreak your iPhone, an entire new world of customization and creativity is available at your finger tips for the tapping. There are jailbreak apps for customizing the lock screen, springboard, notification center, graphic user interface and so much more. The possibilities with jailbreaking an iPhone, iPad or iPod Touch or virtually endless. One of the more popular apps available in the Cydia store right now is called FontSwap. With FontSwap, you can change the font used in your entire iOS interface so that your device can take on a very different look!

When first launching the iPhone app, FontSwap, you are presented with different fonts in the iPhone that you can customize. The first is the Dialer font which is the font used for the numbers on your digital key pad when dialing a number. The second is the Lock Clock font which affects that font used for the clock on the lock screen. Third, you can change the font used in the Notes app which can be a breath of fresh air for anyone who’s sick of the same old boring fonts that come with the iPhone. 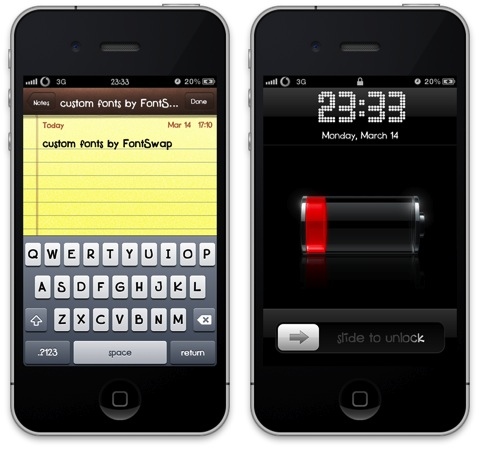 Lastly, you can change the system font, which controls the majority of all text in the iOS interface. Obviously, there’s massive control that comes with FontSwap for manipulating the way that your iPhone looks.

If you ever get tired of the fonts that you’ve installed or you feel that you’ve gone a little “too crazy,” the developer (Gaurav Giri) has made it extremely easy to revert back to normal by using the “Restore Default Fonts” option. Additionally, FontSwap comes with a font previewer that can allow you to see what the font will look like on your iPhone before you even ever use it or install it. 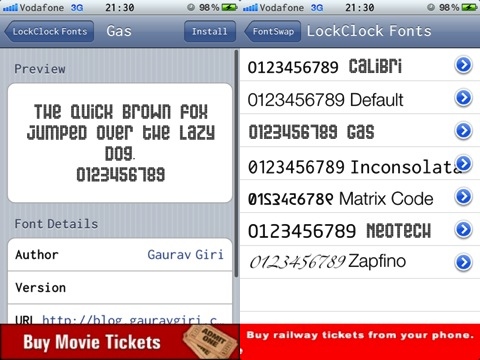 The great thing about FontSwap is that you can download different font packs to accompany the application. They can be downloaded individually or in packs, and there are literally hundreds and hundreds to download from the Cydia store, so you definitely won’t get bored with FontSwap when it comes to experimentation in customization.

Overall, FontSwap is a fantastic hack and mod for customizing your iPhone. Pairing FontSwap with other customization-intensive tweaks such as the Spring Board Rotator or any themes you may have can make for a pretty cool interface. Any serious jailbreaker will want to add this awesome tool to their arsenal of great jailbroken apps.

Note: FontSwap is not reportedly stable in iOS 5 yet, though, so users may experience trouble with loading and using the application under the new operating system. However, it is guaranteed to work under iOS 4 which was the latest stable release.