Up until the tweak called CyDelete iPhone app was launched, jailbreak iPhone users were required to manually remove their jailbroken apps via the Cydia store in a monotonous, multi-step process. As most jailbroken users know, this process can become pretty lengthy if there is more than one iPhone app to uninstall. With CyDelete, the user can simply eliminate apps straight from the springboard just like traditional apps that come from the Apple store. It eliminates the need to use the jailbroken store to manually remove each tweak.

When first downloading CyDelete from the jailbroken store, it’s noticed that there is no application icon for CyDelete or real settings menu. There is a settings menu for CyDelete but it contains one slider for protecting which apps can’t be deleted via the CyDelete function. CyDelete is more of a tweak or hack rather than an application, and it is merely an added functionality to the iPhone’s jailbroken user interface. 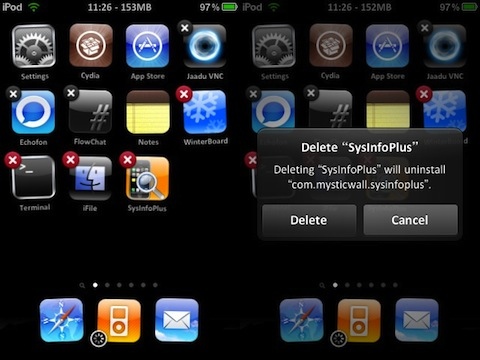 However, CyDelete is extremely easy to use and integrates seamlessly with the iOS user interface. It’s completely free, and it comes in a pretty small package of just over 220 kilobytes. It is definitely non-intrusive and won’t present a lag or slow your device down in the slightest.