Task Aware is a productivity schedule organizer that features some unique location tracking, mapping, and task recording. This app is released by Nino D’Aversa and is available for the iPhone 3GS and iPhone 4 only.

I had some interesting experiences with Task Aware. Firstly, they explain nothing. There are almost no labels on a majority of the buttons. You might be able to figure something out if you guess, but the only way I realized what was what was to make a new task first… then (and only then) it became self-explanatory. At the top of the screen, you have your list organization, then the second row of buttons near the bottom is for hiding or showing certain tasks based on whether they are completed or not.

While creating a new task, the organization of it, with its many different categories, is quite good. You have how important the task is, the date it’s due, category that you can customize, locations that you can type in with a neat Nearby notification, and extra notes. It is very constructed and clean and after making a couple of tasks, the interface became instantly clear. Very nice. 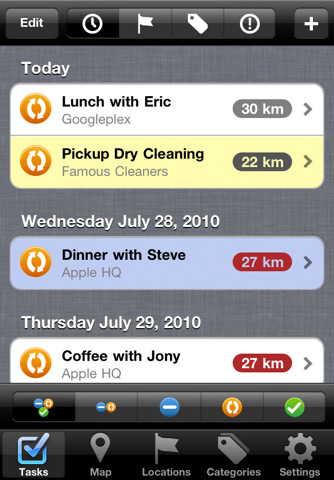 Nearby notification is my favorite feature of this app. When you have tasks with specific locations, let’s say, one at the super market for picking up some milk, then when you drive or move near to the location, the app will actually give you a notification to make sure you don’t forget the task. The battery drain can be bad for keeping the app’s GPS locator on, but sometimes it can come in very handy. You can also map out a list to give you a better grasp on which task to take on first.

The most convenient feature I saw was included in the Version 1.0.2 version of this app where you can quickly add addresses via your own Contacts… but that is assuming you have addresses added for people you have plans with daily.

This app costs $4.99, but I will admit that I use this app more than I ever used then the default ‘Notes’ app. It can take a bit of time to add a new task, but with all the organizing features, I can say that this is a genuinely useful app.

I rarely use utility apps like this, but this app worked for me. I’m sure that there are cheaper alternatives with more or better features however, so the price of this app could be a major negative.