I’m not really the prank calling type, but I will admit to getting a kick out of voice changers. It’s fun to warp voices into bizarre forms, and it was delightful to thoroughly creep out my boyfriend with demonic declarations of affection, so yeah, I had a lot of fun with Voice Morph Pro. It is probably one of the best voice changers in the App Store, but with a few reservations.

With about 20 or so filters to choose from, there were plenty of options to experiment with. You start off by recording a sound file and then you can flip through the various options and run the file through the chosen filter. 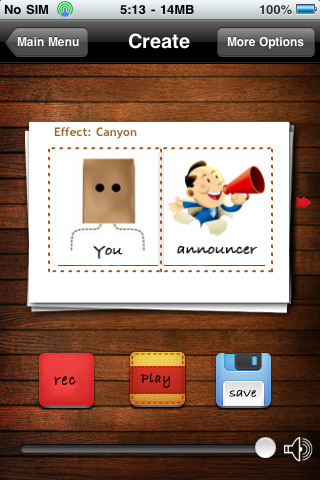 This brings me to issue number one. Finding the filter you want can be extremely tedious, as you must shuffle through the entire list one by one. Why there isn’t an easily browseable list of options, I don’t know, but it hinders the usability of the app considerably.

The second big problem with the app is that many of the filters render the sound file entirely unrecognizable. It’s all very well and good to offer dog or computer voices, but it’s no fun if it just sounds like unintelligible barking and beeping. Many of the understandable filters also sound very similar to one another, so the issue is further compounded by a lack of variety.

To be fair, some of the filters are actually quite good; there just aren’t a lot of them. Instead you’re stuck with things like their “clown” voice, which brokenly switches between high and low, or their “fart” voice, which just sounds like random farting.

There are also controls to adjust the amount of “morph” to the sound file, and there are also options to insert various ambient sounds into the background, like rain or traffic. These are only partially successful, however, as it’s difficult to get the balance right. This may be partly due to the overall poor recording quality, and there are occasionally noticeable audio artifacts that crackle and pop throughout.

Now, this sounds like a lot of complaints, but it’s important to remember that making a good voice changer is actually quite difficult, and Voice Morph Pro does a much better job than a lot of shoddy apps out there. The iPhone isn’t an ideal recording studio, so there are some technology limitations to contend with as well. For the price, I was quite impressed by Voice Morph Pro, but I would have been more even impressed if they’d pared back their voice list to only include the worthwhile filters instead of padding it out with the bad ones too.