101 in 1 is a massive compilation of apps with 66 Utilities and 5 games. Tip Calculators, Flashlights, Levelers, timers, spell check, sirens, fake callers, converters, mirrors, and of course, ways to scar your children. Be aware. I will talk about each and every app, even if it’s just a few words. 101 in 1 GameUtilities is released by iTankster on the iPhone, iPod touch, and iPad for $0.99 and free for a limited time right now.

No time to waste, here we go, let’s start with the games:

Virus Killer: Protect your computer from malware/spyware popups by clicking yes. Touch Yes on anything except ‘restart’ or ‘format’ your computer. Boring, no challenge just a reading test. For all the features that make this interesting, you have to buy it individually. 1/5 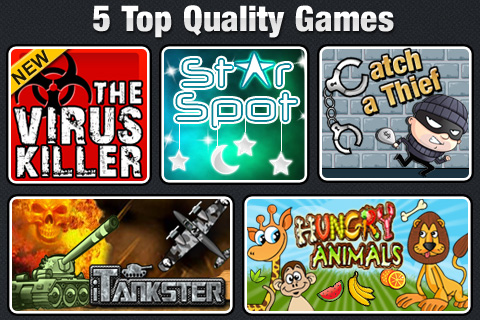 iTankster: Sit in front of the skull by navigating to it. Avoid enemies. Fire rapidly at evil skull and collect its gem. Level over, no need to destroy the other tanks, no need to go near it since you will take damage so just attack through walls and hit it directly. Each level takes about 40 seconds each. It costs money for extra lives, ammo, or special attacks. 1/5

Hungry Animals: Toss food into the right animals’ mouth by dragging your finger. Meat and bones for the lion, fruits for the monkey, vegetables for the giraffe. It’s slow and is badly in need of excitement, but until later parts of the level, it kept my attention. 2.5/5

Catch a Thief: Matching images game. Too many faces, too easy since there is no real time pressure, trial and error gameplay with no surprises after the first stage. It is better than the first 3, so: 2.5/5

StarSpot: Annoying white flashing, spot the new star that appears after the flash but don’t touch any of the older stars. It’s boring, it hurts my eyes, and the music is jingle bells instead of something relating to stars. 1/5 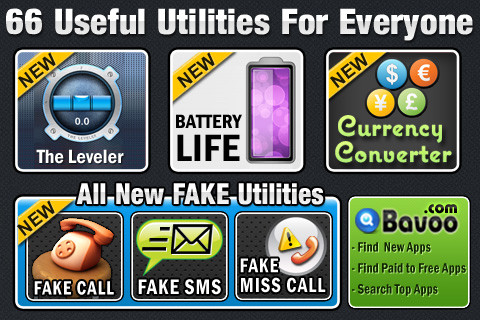 The general feeling is that they are in fact different games, but none of them have any inspiration, motivation, or incentive besides making more money off people having to buy DLC (Downloadable Content) to get any form of enjoyment in the game. Keep in mind, all the downloadable content costs at least a dollar and if you buy a combo pack, it’s $2.99. That’s ridiculous I’ve reviewed nearly at least 50 games you can get for cheaper that don’t cost this much to not suck. It just felt soulless and like a scripting tutorial demonstration.

Now for utilities, what can I honestly say? I’ll try to summarize. This app has 66 Utilities. Of them, I found 18 that were of any real use in a iDevice application. Tip Calculator, flashlight, holiday list, temperature/mph converter, tap count, spell check, fake caller/text/missed call simulators, Google Docs and Email compatible apps, currency converter, guitar tuner, word generator, a list of the US Presidents, and a list of planet information. ALL THE REST are completely basic and could easily have been compiled into a single app at some points.

The worst apps include “Scare Kids” and “Strobe”. Scare kids have a series of sound effects that, according to the app, you use to get your kids to behave because of the scary sounds that come out of it. Granted… amongst friends, this is a semi-entertaining sound generator for things like a woman screaming, ghosts moaning, and dogs barking… but for the sole purpose of scaring your kids? No. Absolutely worthless and insulting to parenting in general. Strobe is all wrong for a different reason. I don’t know if you can get a seizure from this extremely sudden flashing of colors app, but I would never want to find out thanks to this app.

This is an app that is made to suck more money out of the customer, but hey, who doesn’t already do that? The main problem is false advertising. I’ve already come to expect that anything with that high of a number count has to have some weaker apps, but 101-in-1 comes with nothing that stands out. No passion was put into these apps. They all felt like highschool or first year Flash programming tutorials and if you actually grouped similar (and sometimes identical) apps together, this would only amount to 30, maybe 40 apps, of which, again, only 20 are remotely useful at most.

Because the payment for added features are optional, and because this was a semi-ambitious project with some surprisingly useful utilities, I cannot hate this app. Granted, I hated the games, but forgetting them, 101 in 1 GameUtilities – 5 Games & 66 Utilities is a seriously lacking application with some golden apps hidden in it.

Quality over quantity. It’s not just a useless saying, it’s a warning to any developer (again, I’m lookin’ at you Final Fantasy) 2.5