I am a huge World of Warcraft fan. I’ve leveled characters to 80, I’ve played every class, and I’ve run through every race’s starting quests. I may not be an expert WoW veteran, but I sure love one of the biggest MMORPGs in gaming history. MobileWoW wants to give you a discrete way to enjoy your World of Warcraft through your phone via WiFi. Play WoW with one hand! Warning, World of Warcraft terminology might seem incomprehensible to the average human being…. If you don’t have interest in World of Warcraft or you don’t play it, then skip this app completely. Created by Mobilzard Entertainment, MobileWoW is a universal app and is available for $9.99.

Holy Paladin! This app costs $10!? Well that’s why I’m here. Is this app worth the price? 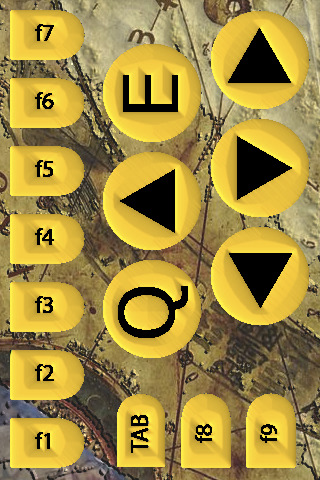 Let’s start with the main feature: controls. This is essentially a wireless controller interface. You have the direction pad to move up, down, left, right, diagonally left, and diagonally right. You have the f-keys to use skills that you can customize so that it doesn’t directly alter your current skills. Does it work? Yes. Does it work well? Yes, yes it does. My character moves smoothly and the interface is strong enough to guide your character around, though very slowly and clumsily. You MUST download the client for your computer however, and you can find that over at http://www.MOBILIZARD.com.

Graphically, this app is bad. Big ugly buttons with Photoshop effects, a background image that looks like rusted metal and in no way reminds me of World of Warcraft, and there are some major limitations. Some people like to use the 1-0 keys; some players customize their interface to use the letters on the keyboard. MobileWoW gives you the f-keys, which I personally never configured nor used. There are no options for mouse movement like a joystick or something, so certain magic attacks, pet commands, and basic functionality are nearly impossible unless you create custom macros or just don’t use your best skills. You cannot click on monsters so you have to use the tab command, which is functional, but far from optimal.

The reason I find this app nearly useless is because of its implication. Play WoW during work, during class, and use it to hide from your teachers? I wasn’t aware that you could play WoW and still understand a lecture or complete your assignments at work on time. When I work, I work. When I play, I play. World of Warcraft isn’t exactly a game you can leave in the background, especially if you are like me and you play in a PVP server where anyone can appear and slaughter you if you aren’t responsive enough. Another issue was in the misleading description for the AppStore. How am I supposed to loot my killed enemies, cast mouse-related Area-Of-Effect magic, or use a mailbox?

You can’t without using the actual computer, which brings up the point of how you are allowed to use a laptop during school or work if having your hands and eyes on it will get you into trouble. Playing WoW can sometimes look just like typing or taking notes, so why would I bother having my phone out (which in my experience is a bigger no-no then having a laptop out)?

I have no use for MobileWoW at all and I can’t imagine many people willing to shell out $10 for MobileWoW. I can’t even imagine how conspicuous someone will look with the iPad AND laptop out during class. If you want to play WoW, and then play WoW for a few seconds, hide it and continue your class or work. Having your hands on your phone while the laptop screen is showing the game would just make it harder to minimize the WoW screen or close your laptop anyways. MobileWoW app works, but you should expect WAY more for $10. More customizable control layout, more buttons available, class specific buttons, and maybe a full graphical overhaul would definitely make this app a must have.