The days of checkbooks are fading and the days of checkbook registers are probably close to being forgotten. Yet, even though online banking has proved to be more than useful for getting a quick snapshot at your personal finances, it’s not always up-to-date since some transactions post later even though you may have already “paid” for something.

iReconcile brings back the checkbook register for the modern age. Its greatest strength is its simplicity and disconnectedness from your bank’s online transaction data. Unlike services such as Mint.com, iReconcile does not attempt to give you a snapshot or rough idea of all your accounts and your current overall financial standing by online syncing your bank accounts, instead it covers the basics of your day-to-day spending and helps you to keep track to the penny of what you currently have available in your bank accounts. 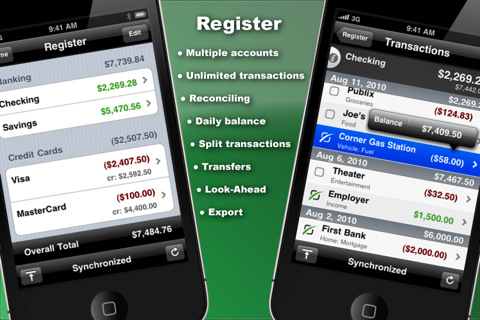 With iReconcile, you setup your bank accounts with a starting balance. Then, for each transaction you make throughout the day, simply input it into iReconcile to immediately see what your new balance is. Did you happen to write a check, or pay some bills online? Neither of those will reflect in your current online banking balance and its up to you to keep track of them. Input them into iReconcile to remind you what your actual balance is.

Additionally, the app has a great iOS interface, is easy to navigate, and has intuitive controls. It has some great little details that make it complete, such as the ability to categorize your transactions, set up some memorized transactions, create reports from your accounts and categories, and even setup some budgets to stick to.

iReconcile also allows you to set a passcode lock, much like the one you can do for your iPhone, to keep it secure from other people that may use your phone. 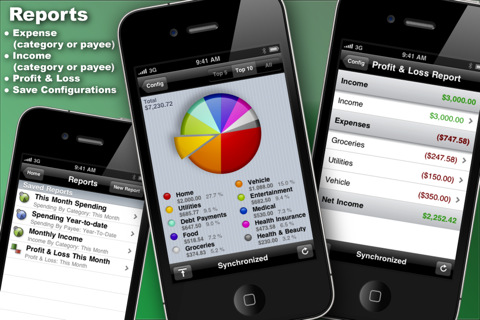 If you share bank accounts with someone else, such as your spouse, iReconcile allows you to sync between multiple iPhones. The best part about this, it is all done over a secure connection to the iReconcile servers—meaning you don’t need to be near a computer or on the same WiFi network as the user you want to sync with. The online sync service is not mandatory to use the app. It is free for the first 30 days and is $1.99 per month or $19.99 per year—very reasonable if you consider that’s only $1.66 per month to stay in sync with multiple devices. This also includes the ability to view and edit your transactions online at iReconcile.com’s Web Portal. The security used to transfer your data is the same that’s used for your online banking. Keep in mind that there is no personally identifiable information transferred either, so it is safe to use.

For those that already use a product such as Quicken, iReconcile also allows exporting of the data to either QIF or CSV—with which you can choose the transactions to export either by date or new transactions.

iReconcile as a whole is really a great package if you want to get serious about keeping a closer eye on your day-to-day spending. With it’s ability to sync with many devices anywhere, it’s a great option for multi-user bank accounts. There is a free, lite version available that has all the functionality of the full, paid version but limits to keeping track of 25 transactions.

Some improvements I would recommend to AtomicUnit Software are:

Sample the free version of iReconcile on your iPhone.