Microsoft OneNote for iPad is a new powerful iPad application that excels as a platform for the collection and organization of irregular data, including typed notes, handwritten notes, recorded notes, photos, drawings and so forth. The OneNote platform is also well suited for collaboration. A separate iPhone version of OneNote (iTunes) is also available for download from the App Store.

Originally, Microsoft launched OneNote tightly integrated into the Microsoft Office suite. With the rise of smartphones and tablets, however, it was clear that OneNote had far-reaching applications. Although still included with the Office suite, OneNote is now decoupled from it and available on a wide range of platforms. 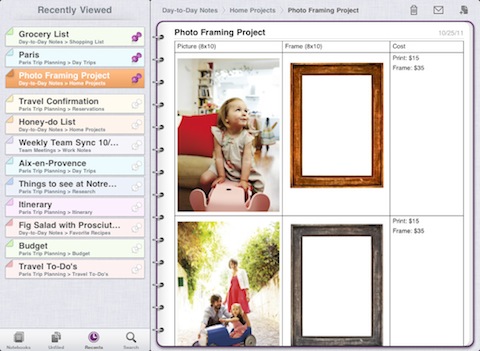 Nearly a year after the release of an iPod touch and iPhone app version, Microsoft has finally released OneNote for iPad. The good news is that the OneNote iPad app is completely free to download and use, which includes access to SkyDrive, Microsoft’s cloud. Like the iPod touch and iPhone app version, which remained free as well, that non-cost has some limitations associated with it.

The free OneNote iPad app gives you full access to features and functionality, but the catch is that you can only create five-hundred notes. For some, this may be no limitation at all. If you have one notebook that you’re constantly revising, you can delete unnecessary notes and stay well under the limit. For those using OneNote often in an education or work environment, the limit may be too restrictive. 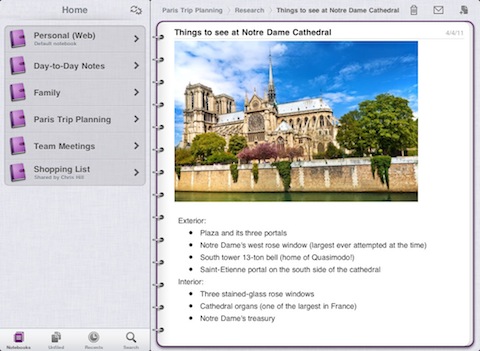 To upgrade to the full application, which is available via in-app purchase, the cost is $14.99. That may seem like a lot for an iPad app, but if you use a virtual notebook often, it’s worth it. There is simply no other notebook program for the iOS platform like it on the market. Microsoft gets a bad rap sometimes, but office tools are something they do particularly well, especially concerning stability and feature set.

OneNote’s best feature is its synchronization. Any notebook you create or edit on any platform is available on any other. If you create a notebook on OneNote PC, it works as expected in Office for Mac or on your iPhone, and vice versa. There are some differences between the versions, and there are minor features available on the PC that aren’t available on OneNote Mobile, but Microsoft uses some clever techniques to ensure that everything displays. 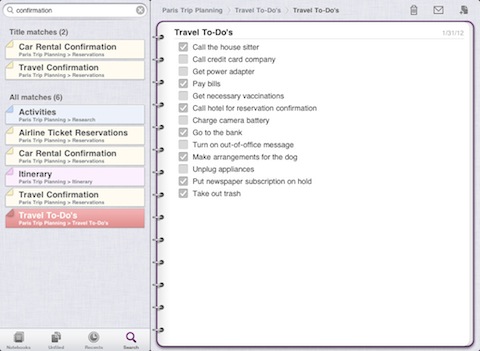 OneNote’s second best feature is its interface. OneNote makes it very easy to create, edit and delete notebooks and pages within notebooks, and when you edit, the navigation automatically drops away to expose a large and open workspace area. In addition, drag and drop is among the best we’ve seen in a mobile program, and that makes it a simple thing to organize your notebook precisely as you like it.

The glaring omission from OneNote on the iOS platform is a “print to OneNote” feature, which may be a platform limitation. As is, it can be difficult with certain programs to move data over to OneNote. This is more a problem with those programs than OneNote, but a print-to function would alleviate much of that frustration, and it’s one of the more powerful features on the PC and Mac versions.