The Lo-Mob photography app brings an efficient interface and elevated sharing capability to the iPhone. The lo-mob iPhone app combines many of the great features of Hipstamatic and Instagram with a streamlined approach to the process of producing image effects. It also introduces an enhanced ability to share photos that have been transformed with popular modern interpretations of vintage camera aesthetics.

To get started with the app, you can shoot a photo with the camera within the app or choose one from libraries on your iPhone. Unlike Hipstamatic, Instagram, or Snapseed, the Lo-Mob app instantly processes all 39 effects and produces a list in a new screen. You scroll down through the categories Classic Vintage, 35mm Film Experimentation, Through the Viewfinder, Emulsions, Instant Matic Photography, and Contact Mask Photocards to see your adjusted photo and a description of how Lo-Mob’s iPhone app manipulated the image. You will appreciate the speed and ease with which Lo-Mob processes your photo and allows you to make a selection. 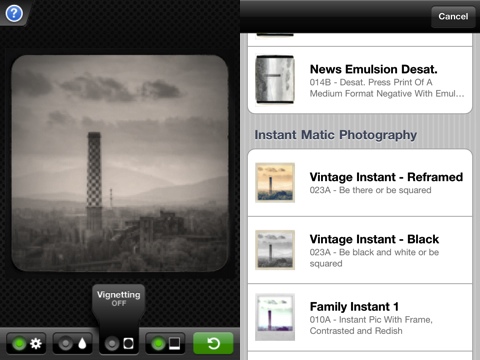 Each of the effects includes a default parameter. By touching the screen and manipulating the size and placement of the shot within the frame, the icons that enable you to make further adjustments appear. You can turn on and off a few simple items like the photo frame and the filter. Unlike Snapseed and Luminance, the options to make adjustments to your photo are fairly limited. With a touch, you can return to thee image generated by the Lo-Mob iPhone app.

When I played with the app and its features, I appreciated the quick, intuitive response and excellent graphic quality. Every time I adjusted an image with the tools provided, I found I preferred the default image. The Lo-Mob iPhone app makes it easy to generate vintage, edgy photos with little skill, time, and photography knowledge.

Once you have selected and refined your Lo-Mob photo, you will be surprised by the many options available to save and share with just a touch or two at the bottom of your screen. The Lo-Mob iPhone app enables you to save to your camera roll or Picasa and Flickr albums, share via Facebook and Twitter, and email by pressing the envelope icon. When you press the disc icon, you have the option of copying to a clipboard, printing, sending to an app, and opening in Instagram. The selections to share are processed quickly and accurately. With social networking’s growth and popularity, the Lo-Mob iPhone app has been created to ride that wave. 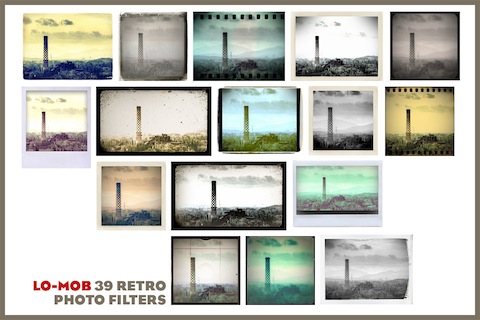 As an iPhone photography utility, Lo-Mob and its developer aestesis have created an intuitive, highly functional app making edgy, vintage-inspired photography available to anyone. But, the truly striking, cutting edge feature is the depth and breadth of sharing capability. In the world of Pinterest, blogs, Twitter, and Facebook, the Lo-Mob iPhone app helps you capture moments and life’s inspirations creatively and share them easily.