The FaceVault iPhone app combines facial recognition and photo album security. With a refreshing easy to use and intuitive interface, you can quickly set-up the FaceVault facial recognition app and make it more difficult for sneaky eyes to immerse themselves in your iPhone and iPod Touch photography. The problem with the app is that it is very limited in terms of what it can protect. The app can’t serve as security against the use of your iPhone, but only limits access to files inside the app itself. It also does not prevent access to the native iPhone Photos app.

The FaceVault iPhone app requires an internet connection and location services to operate properly. You must allow both of these permissions to maximize the features of this shockingly simple iOS app. In order to activate the facial recognition functionality, you take a photo in an environment with ample light. You hold the iPhone, iPod Touch, or iPad and place your face in the area specified. After a few moments, your photo is saved to face.com. Per the assurances of the developer Robert Paul Neagu, your photo is only saved on the face.com server and cannot be viewed anywhere else online. Your photo is also saved to your login photos within the FaceVault iPhone, iPod Touch, and iPad app. 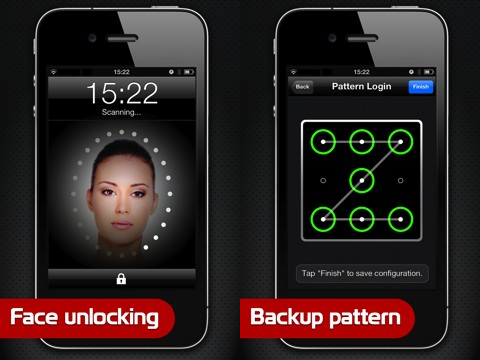 The FaceVault facial recognition iPhone and iPod Touch app is finicky and does require patience. I took my facial recognition photo without glasses, so it did not accept me with glasses. In that case, I was required to use the pattern recognition. Interestingly, if someone attempts to access your FaceVault iOS app, you will find a photo of the culprit in the FaceVault photo album.

Overall, the FaceVault iPhone app is a cool idea, but the functionality is very limited. Once FaceVault incorporates more files and data to secure, it will certainly be more interesting and more vital. If the app can somehow fully lock out your device from use, it will then be an amazingly powerful utility. For now, it’s $0.99 spent to add privacy & prevent embarrassments or at least make a great conversation piece.