Who sings that song? Find out by Shazaming it. Shazam is probably one of the most popular apps available in the iPhone App Store that will change how you discover and buy music. So much so that to Shazam is now being used as a verb, some comics are even being pledged to Shazam. It is also one of the most useful apps around today and to make it even better its a free app.

Shazam listens a short sample of any song being played, records and uploads data about what it hears to the Shazam server, and almost instantly returns the Song name along with the Artist name, Album Name, Genre, Record company and even the Album Cover. Just hit “Tag Now” and watch the spinning record do its magic. Shazam vibrates once it has found the result and slides to show you the results. 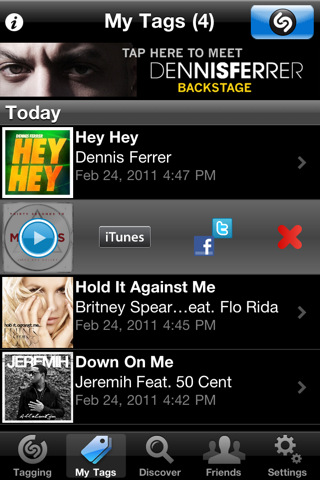 Another great feature of Shazam is its history log, which keeps a log of the past few song you’ve tagged, so you can have them at your disposal at a future time.

There are also some social features tucked into Shazam. For example you can share the results of a tagged search via email. Shazam also lets you take photos and attach them to your tagged songs and add missing album covers from your photo library. A new friends feature has been added as well, see below for details.

By default Shazam records a 12 second clip to get its results. You can edit the Shazam options under Settings and pick either 8 seconds, 10 seconds, 12 seconds or 15 seconds. Our tests showed that even with only 8 seconds we are able to get accurate results.

Shazam Entertainment is a privately held company headquartered in London. A similar iPhone app called Soundhound is also available in the App Store. Soundhound (previously named Midomi) has a few additional features including finding songs by listening to you humming out a tune.

Today Shazam released an exciting update version 4.0.0 that adds “Shazam Friends” to its iPhone apps. From the new Friends tab you can now share and view tagged songs with your Facebook friends. This allows you to listen to your friend’s songs and as well as see which friends are already sharing their music on Shazam and invite them to join. To get started with Shazam Friends you have to do 2 things. First you have to authenticate your Facebook account, then you have to Link your Device by creating a Shazam account, both from the Friends tab in the Shazam app. Once you’re setup you see a list of songs from your friends, much like Facebook status updates as they tag new songs. The service is brand new so as of right now I seem to be the only person using it.

The free Shazam app is limited to 5 Tags per month. Shazam Encore $5.99 iTunes Link is the premium version of Shazam which gives you unlimited tagging ability. Users who downloaded the original Shazam app before the paid version was introduced where grandfathered in and are given free unlimited tagging on the same device. The trick here is that once you move your app to a new device, you will lose your free grandfathering. For example if you move from an iPhone 3GS to an iPhone 4, you will have to buy Shazam Encore if you want free tagging. Now, if you are willing to contact Shazam support, some users are reporting that if you send them your original receipt and UDID, they may be willing to re-grandfather you in again.