Melodica is a music composition app for the iPhone that uses blinking lights and a soundboard to mix and create great tunes. From the creators of Fuzzle, Melodica for iPhone gives you the ability to compose music intuitively, creating amazing visual effects just with the tips of your fingers. Music something mysterious. Whether played by an orchestra or booming out of the car next to you at a stoplight, music is in every commercial you see, every movie, every game, and every sporting event. Melodica is a unique music composer app where you touch boxes on the screen and the sounds loop by playing the boxes you highlighted. Melodica is brought to us by CandyCane LLC and is available on the iPhone, iPod touch, and iPad for Free (which lacks save/load/delete melodies, melody sharing, 4 musical instruments, and customizable tempo and scales) and a $0.99 version with all the features available. 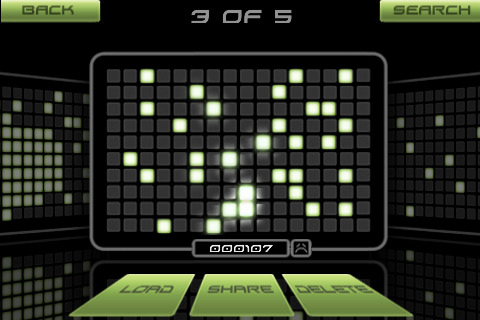 Melodica is not a game. No no, instead, you touch little boxes that fill the screen. Every couple of seconds (which you can customize in the full paid version) the app will ‘read’ the boxes you pushed and plays the sound/s column by column then loops again and again. Every column contains the exact same notes from high to low, giving you 10 notes each and any combination of activated notes available. Sliding your finger across the screen will light a line of boxes and tapping an already activated box will turn it off.

I was pleasantly surprised with each experiment of this app. Each time I made random boxes light up, the beat, the sound, was always something musically catchy… sometimes cool. Because of the freedom in Melodica, you can draw shapes and see what kind of song they could create like hearts, x-patterns, or even staircases. Each box plays its notes separately simultaneously. What I mean by this is that if you have two notes in one column, each will sound distinct from each other, allowing you to add simple bass sounds along with higher notes making a more complicated melody. 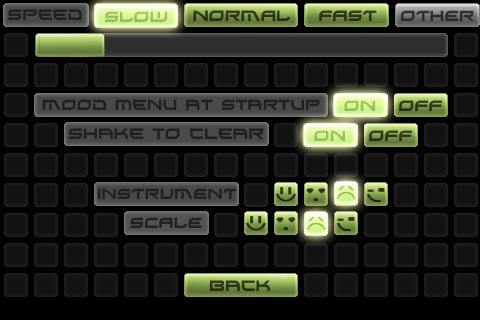 Melodica could potentially be one of the stronger musical apps in the AppStore if it included some advanced features. Imagine being able to automatically save one of your melodies as a fully functional ringtone? Do you folks know how annoying it is to set up a ringtone in iTunes from your own .mp3’s? It’s unnecessarily difficult. If this app could fix that, by allowing you to create your own unique sounding techno ringtone, then it would be amazing! I would love to see more musical tones besides the set four and maybe some options to change the colors of the glowing cubes and be allowed to manipulate how long I want the music to loop. It would be much more versatile to scroll through a long composition rather than be limited to a set amount of boxes. It could be the next Mario Paint music maker!

With all things considered, Melodica is a wonderful app with a great premise. I haven’t seen much like this before and if they somehow include a way to save out the melodies as either ringtones or some form of convertible music file, I would be very happy. Despite that, this is still a very well done app with lots of positives. It’s free, so you have no excuse. Download this one and see how awesome it is.