The new Boxee app for iPad is here allowing you to watch videos from YouTube, Twitter, Facebook, Tumblr, and your computer all in one place on your iPad. You can’t tie into and watch Netflix, or Vudu videos in the Boxee iPad app as of right now however. The new iPad app is great for existing and new Boxee users and signing up is really easy. As an added bonus, besides streaming online videos, Boxee can also stream your own photos and music from your computer to your iPad, although only over a wireless connection and not 3G at the moment. To get this feature working you’ll need to install the Boxee Media Manager on your Mac or PC. The app will transcode video from your computer in realtime as you stream it to your iPad, if the video format natively supported by iOS. If you own the Boxee hardware connected to your TV at home, you can also send video content to your box and watch them there using the newly added AirPlay support. 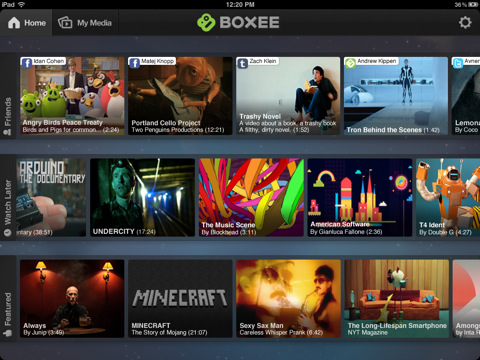 With the free iPad app from Boxee you can also find, collect and watch what people in your social circles are talking about, including videos shared on YouTube, Facebook, Twitter, and Tumblr. Once you are logged in you can add video content to your queue and watch them from your iPad anytime you’re ready.

Boxee is a good replacement for other media management and playing services like Plex and maybe even competition for the Apple TV and Google TV. Try out the iPad app, and be sure to also check out the Mac and PC apps as well where you can add in Netflix, Vudu, Youtube and a bunch of other apps to watch in one place. Boxee Box is also set to add HBO Go support soon. It might just persuade you enough to want to buy the Boxee Box which you can pick up for around $200.