Part of the adventure of going out to eat is figuring out how to split the bill. One fun nuance is determining exactly how much to tip the server: were they attentive? rude? completely intelligible? All these and many more circumstances factor into a tip percentage. Well, it’s rather cruel to expect people to do mental math after a huge meal, so how about using Uncade’s helpful STIFF ‘EM app?

Enter the bill amount using the number pad provided; you can have up to five digits, two of them after a set decimal point (the decimal point is not provided on the pad). Tap Done, and the number pad will slide down to reveal what looks like a spinning carnival wheel. Tap Spin! to set the wheel in motion, and once the indicator lands on a wedge, another screen will pop up with the tip amount calculated based on the percentage written on the wedge. If you don’t like the percentage, you can always hit Play Again to spin again. There are 16 random tip percentages and one wedge entitled S!, which means you should basically do what this entire app is named for: Stiff ‘Em. 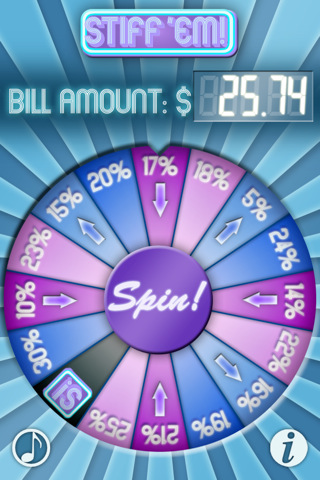 For such a small, simple app, STIFF ‘EM is pretty well designed. The color scheme and music sound effects evoke a Wheel of Fortune-esque feel, although you’re actually more likely to depart with your money than win any. All the graphical movements were smooth and the app was easy to use; sometimes the tip amount was rounded up or down to make the total a whole number, which I appreciated. However, unless the service was absolutely horrid, I don’t really condone stiffing the wait staff out of their tip. I’d rather spend the $0.99 this app costs on a tip calculator app. 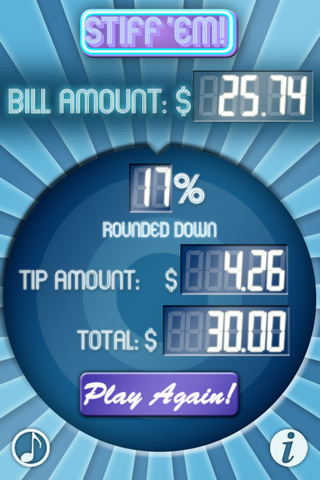