If you know how to tap on the iPhone screen, you can make beautiful melodies with the TonePad Pro app from LoftLab. TonePad Pro simplifies music making, by removing every bit of confusion and painful complexity from the process, leaving you only the joyful parts that result in instant gratification. TonePad pro mends music making with art design to perfection; to the point where the line between the two fades out and leaves you in a world of pixel based sound and art.

On startup, the TonePad app displays a blank 16×16 square grid of circles on the iPhone screen. What you don’t realize at first is that there is a constant loop running from left to right, which picks up the tone of any circle that you touch and fill-in. The notes for each vertical line range from high on top to low on the bottom with 16 variations, which you can cleverly combine to create chords. If you mess up and want to move things around, you can shift your entire creation up/down/left/right, flip it horizontally and vertically, and even shuffle them around for random placements.

TonePad Pro is audibly pleasant, yet it is also visually a treat to look at. As your notes get picked up by the loop they illuminated and emit a glow that radiates away from the center in colorful waves. You can even go into the settings and customize the 3 types of colors for the foreground, background and the pulse color to create some seriously customized songs. 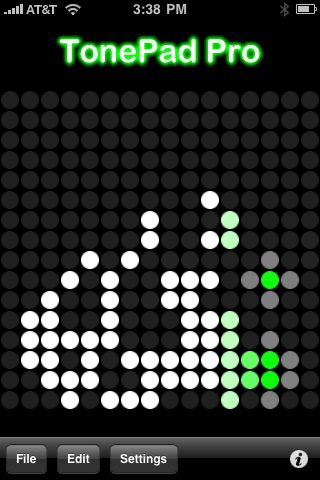 Now for the best part: You can import, export, upload and download your creations. Using a central server hosted by LoftLab, users can upload their stuff to share with anyone in the world. You can as easily download the latest uploads from within the app. Wanna have your song as a ringtone? No problem. With one touch, TonePad Pro will export your song, and email it to anyone you choose as a TonePad.m4r file attachment which you can sync with iTunes and assign to your iPhone via the Settings App under Sounds > Ringtone. You can also save your creations locally to load at a later time, save other people’s creations that you download, or upload your stuff to share with others. You get a code once you upload that you can give to anyone that wants to check out your tones. If someone has given you their code, you can go check out their tone as well.

On the uploaded list are a bunch of creative songs where people are using the app to spell things out or draw shapes that in turn actually sound neat as well.

We only wish we had the ability to do a few things missing in the App. First, as great as the online sharing is, it would be great if users could rate the songs, and browse the top rated ones as well as being able to see the latest ones currently. Second, it would be great if the tempo could be adjusted, which would make allow for a larger variety of sounds. There should probably be a way to pause the loop. Although the piano sound is great, an option to swap out the sounds to maybe drums, or other types of synthesizer sounds would be awesome. Finally, and this is just a minor issue, on the board, it would be great if the large TonePad Pro text on the top was either removable or customizable to match the colors of the Tones.

With a few feature additions, this app could easily be rated a 5. All and all, TonPad Pro is by far the most original app we’ve seen this month and we can’t recommend it enough. You can whip out new ringtones in a blur and go crazy coming up with cool melodies.

Sample the lite version of TonePad Pro on your iPhone for free.