Intel Postcards From The Future review

Email, Facebook, Twitter…who has time to make an effort with personalized, hand-written messages anymore? Moderati’s Intel-sponsored app has an interesting solution to this sad state of affairs: Postcards From The Future! That is, you can use this app to make and send postcards, but with a futuristic flair. Postcards From The Future uses your device’s camera, so if you’re an iPod Touch owner, be sure to have a photo of the person you want to use as backdrop. 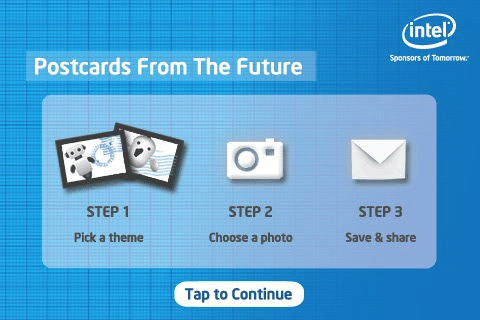 The first step is to pick one of two themes, each presided over by two different types of robots: flatter*e bots and doodle bots. As you can imagine, the former lavishes compliments while the latter graffiti’s over your photo. Both robots have at least three varied statements or actions, so it would help to know which photo you’ll be using beforehand. After choosing the message, you’ll get to use the camera for the postcard’s big picture, or you can grab a photo from the Photo Album. Position and zoom the photo at will; the app will show you where the bots (or their handiwork) will be, so you can adjust accordingly. Once you’re done, a preview of the animated postcard will play, and then you can save the postcard to the app as well as send it out through email, Facebook, or Twitter. 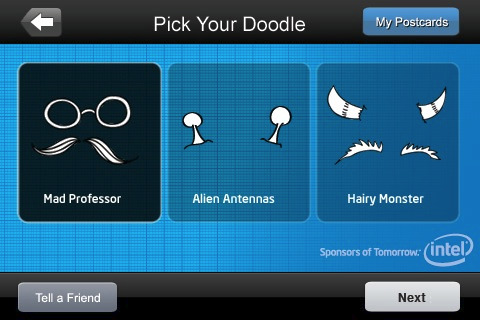 Postcards From The Future is utterly adorable–and free! However, this also means that content doesn’t really get updated, and I’m definitely wanting more. More variety, more options, more choices. The messages and graffiti are all people-related (although if you wanted to insert your dog, I guess it could work)–what if I wanted to send a postcard with a nice background and a bot doing cartwheels? Also, I dislike that there is no undo or edit button while you’re in the process of making a postcard. It is fantastically designed, however (the bots are so cute!), in ultra-soothing blue and with instructions that can’t possibly be misinterpreted. Considering that it’s for free, this is a pretty sophisticated app, and I can’t help but to wish for more.

This 3rd Party App is available at the Apple iTunes AppStore. Browse the full list of all AppStore apps filed under the AppStore category.
Download Intel Postcards From The Future at iTunes App Store
Price: Free
Developer: Website
AppSafari review of Intel Postcards From The Future was written by Julie Guan on December 21st, 2010 and categorized under App Store, Free, Fun, Photos, Social. Page viewed 4522 times, 1 so far today. Need help on using these apps? Please read the Help Page.