The djay app for iPad is an iOS port of the cutting-edge digital deejaying solution by the same name for Macintosh. Algoriddim’s flagship beat-mixing software has been redesigned for the iPad’s spacious screen, and offers enough professional-grade deejaying tools to be gig-worthy right out of the box. The app offers a retro two deck design that will feel comfortable to any music-mixing veteran, and just plain sexy to the amateur user. Simply load up two tracks and get straight to beat matching with the included tempo sliders, transitions, loop effects and crossfader. It’s a comfortable, robust and accessible way to get into deejaying, and for a limited time only it’s half off ($9.99) in the App Store.

First and foremost, djay is an excellent beat-mixer—an obviously important element, as that’s what separates the app from say your iPod, or Pandora. The app will automatically analyze any loaded tracks for a beat-per-minute ratio. Using this number, you’re free to load other tunes and sync them to the first for either a drop transition or a mash-up of the two. For the most part, Djay’s analysis were spot-on, though I did occasionally have a track listed at a beat or two off. Dropping tracks was easy with the included transitions (as well as the Sync button). However, because the iPad’s processor is not as good as your Macbook, transitions will not automatically line-up perfectly every time. This isn’t a bad thing: You’ll simply have to get comfortable with retro-style beat matching, sans waveforms and automatic mixing. Besides, messing with the excellent beat sliders and track nudgers is more fun, anyway. 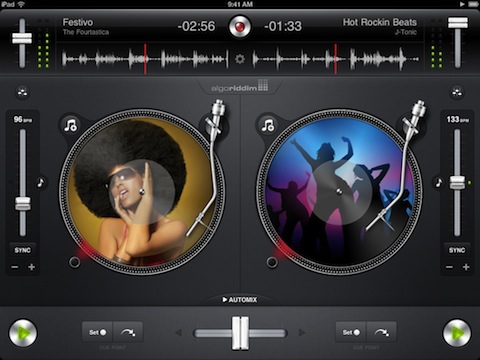 On that note, djay does take a more classical approach to effects and loops. Earlier versions of the app capability, and though this has been rectified (looping a cue point is now piss-easy, thankfully) there are no effects with which to modify the loop on-the-fly. This isn’t a biggie if you’re running an R&B mix, but if you’d like to max out those techno loops with a flanger-reverb-chorus combo you’ll be out of luck.

That being said, setting cue points is extremely easy and immediately accessible from the main deck. Recent updates even brought multiple cue points, allowing you to loop the heck out of any track. Simply drag the needle where you want it and slap the set button. djay will even add a piece of tape to the vinyl as a visual representation of the cue point you just made. 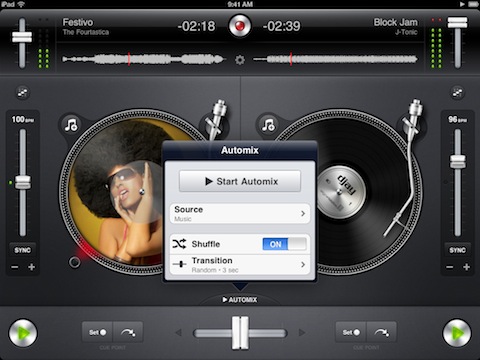 At the end of the day, djay has gone a long way toward making the iPad a deejay’s dream. The app’s stellar design is award-winning, and a great way for veterans and newbies alike to experience beat-mixing and music-mashing. The app is a bargain at its regular price—twenty clams—and an absolute steal while on sale for half that.