Drunken Klaus 3D, the Carribbean Rum from ROOT9 is a physics based game for the iPhone featuring a severly intoxicated dude named Klaus who wakes up along a pier on the beach and desperately needs your help getting around. Tilt your iPhone to keep the wobbling stuttering poor fella from falling down or splattering into the water. Help him sober up by guiding his walk into the path of energy drinks. You can also get him more intoxicated by having him collect and drink more liquor, as if he needed any more alcohol.

To start walking you rub the screen, sliding your finger down helps too, to get Klaus walking after chugging a drink. Then you just tilt to keep him on his feet. Controlling Klause is not easy to say the least. He’s absolutely smashed and his body goes in random directions without much control. The pier is pretty narrow, surrounded by water, and to make matters worse, there are big giant fish laying around on the dock, which make Kalus slip and fall on his back. You can however tap the screen to have Klaus jump over those pesky dead fish. 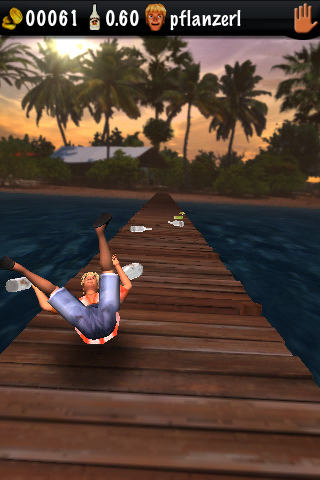 The graphics are pretty colorful, dynamic and as the game title notes, they are certainly in 3D form. There are no settings in the game, as far as difficulty levels or disabling sounds etc. It would be nice if there were different levels of drunkenness that you could pick from as an option. You can actually set your name which is used for your online leaderboard scores and stats. There is a simple help screen that explains the basic moves.

The most notable feature of the Drunken Klause 3D is the audio. If you’ve ever heard a drunk person talking, or at least trying to, you know how funny it can be. In the game you’ll crack up listening to a seemingly random bunch of words coming out of his mouth as he stumbles around. He yodels and thanks you for helping him. The game also has great sound effects like calm beach waves, silly banjo music, and sounds of Klaus snoring when he passes out.

Drunken Klaus 3D gets is roots from the base experimental free iPhone project app called Klaus which still exists and has been extremely well received. There is even a free Flash version of the old school Klaus game that you can play online for free, although controlling Klaus with the accelerometer is more fun than using a mouse and keyboard. Drunken Klaus 3D is quite unique and a great little whip out and play game for when you wanna get away from your sober daily grind for a few minutes.