It seems that more and more classic games are being ported to the iPhone–sometimes it works, sometimes it just doesn’t. In the case of Renato Pessanha’s Domino Box, it definitely works. In fact, this shiny app is one of the best, simply because it plays well (just like the original game) and looks fantastic. You can play under three different rules sets and choose how many points to play till: Draw Game, International, and Points By 5’s. All the rules are explained in the Help section, if you’re not familiar with any of them. You can also customize your playing by changing between three different types of board and three different sets of tiles.

There are two modes: against the AI in One Player mode or against your friend in Two Players mode. The AI is pretty smart, but the Two Players mode is a tad inconvenient, as the device will have to passed between the two people. But, the developers have hinted at a jump to utilize the connectivity abilities of an iPhone, which will improve this game even further. As befitting the classic game, there is no soundtrack, but the sound effects are done quite well. Another great thing is that your current game is autosaved, so you won’t have to start over every time you launch the app. 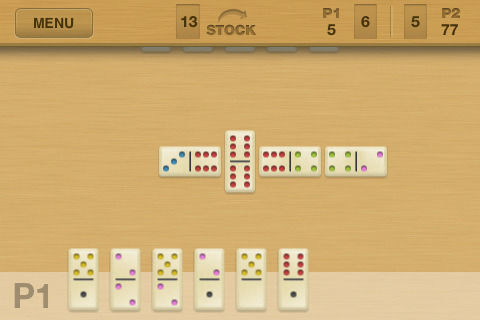 The classic game is preserved excellently in Domino Box: not only is it technically proficient (there’s even a Hint function for when you’re stuck), but gorgeous to handle as well. It’s clear that the design and layout were the products of a great deal of effort. I admit to missing the physical aspect of handling the tiles, but playing Domino Box is easily a close second.