Orbit is a simple and free physics toy by RunSwimFly. Like a lava lamp (or the iLava app), Orbit is just a mellow relaxation tool for the brain, and this one is about as basic as it gets. There’s no goal, no timer, not even any music or sound. There’s just you and a pretty cloud of colored particles, swirling in the silent emptiness of space.

You start off with a large ball of shifting color pulsing against a black background. Touch it, and it shatters into a chaotic mess of hazy, multicolored motes. The developer calls them “stars”, but they really just look like tiny blobs. From an aesthetic point of view, I probably would have preferred sparkly pinpoints of light, but given the price (FREE), I certainly won’t complain too much, and the robust physics engine more than makes up for it. 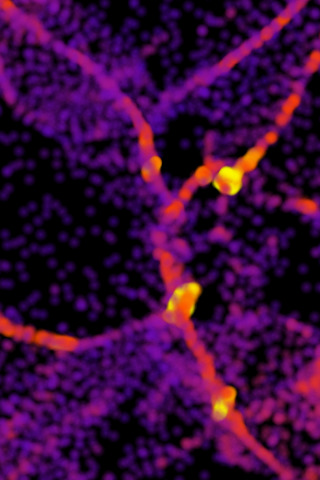 The beauty of Orbit lies in its interactivity. You can choose between a high res or a low res version, and your finger acts as a point of gravity. You can spend your time collecting the “stars” into a larger blob, or you can use your finger to fling them around the screen. The color of the blobs change the more “stars” they have in them, with individual blue stars fusing into hot red or yellow fireballs as they meld together. The engine is nicely sensitive, with the smallest movement sending particles careening into each other, resulting in a very pretty sort of chaos that you can dip into and swirl around. The high res version lags just a little, but the default setting is more than adequate to give you a pretty light show, perfect for a couple minutes of quality zoning out

Overall, it’s just barely an app, more like a demo for developers. It’s great for demonstrating the physics engine, but it’s missing all of the details really needed for public consumption, like a sleek menu and sound. The addition of those would go a long way to upping Orbit’s appeal. The graphics are still pretty basic, and even the physics engine isn’t worth getting too excited about, but it’s still a pleasant, gentle diversion. Because it’s not frantic, like popping bubble wrap or unrolling toilet paper, Orbit is perfect if you’re looking for a true relaxation tool on the cheap.