Playing this game is a lot like eating an entire tray of hors d’oeuvre at a fancy cocktail party. Sure, they look great and they taste great, and maybe you absolutely love mini-meatballs, but they’re not really a satisfying meal, and you’d feel a little sick if you ate them all at once. But they’re amazing in moderation, and, man, sometimes a mini-meatball really hits the spot!

Rather like Katamari Damacy, Cooking Mama is one of those odd little games that somehow turns into a huge cult classic before anyone really notices. Originally released on the Nintendo DS, Cooking Mama has gone on to spawn several sequels for the DS and the Wii, and even incurred the public wrath of PETA for its use of meat in the game. But don’t fret; no real animals are ever harmed as Mama leads you through a series of cute mini-games in this irrepressibly cheerful, casual cooking simulation. 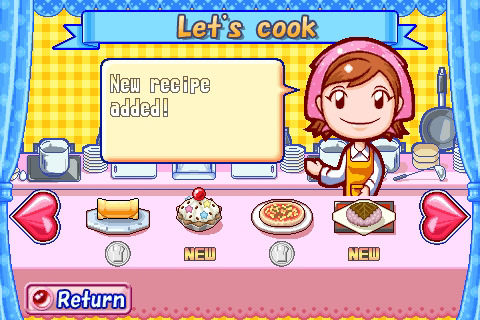 Although food is certainly the central focus, you might be under the impression that the game teaches you to cook. Make no mistake, this is definitely not an education tool, but you -are- here to cook. Recipes are broken down into very simple mini-games, generally prep work like peeling potatoes or molding hamburger patties, with the game switching between touch and accelerometer controls. Do well and you’re rewarded with smiles and medals. Do poorly and Mama shifts into scary demon mode with eye flames and a resolute, “Don’t worry, Mama will fix it!”

She’s not actually that scary, in fact, nearly everything in Cooking Mama exudes a saccharine Japanese cuteness. The art style is unbelievably clean, all thick outlines and bright colors, and the music, also a little bit on the unbearably sweet side, is undeniably appropriate. Style-wise, Sugar Mama is an adorable, sugary confectionery of a game.

Despite some occasionally frustrating sensitivity issues, the iPhone really is the ideal platform for the game. Cooking is an incredibly tactile process, so being able to use the touch screen to “handle” ingredients or shake the iPhone like a sauté pan is great, but, as I mentioned, the controls aren’t quite perfect, but hopefully this is something that will improve in later versions or sequels.

A bigger issue is the number of recipes; more specifically, there aren’t nearly enough of them. There’s easily room for twice as many, and while it’s certainly possible to replay levels multiple times until you’ve perfected the recipe, this gets dull quickly, especially when you consider that most recipes are simply recombining the same mini-game elements.