Yes, painting the town red can be fun but there are nights when you just want to cuddle up under your blankets with a good app. THQ, developers of the original game where you could literally paint a town red (or blue, green, yellow, and brown) have added a new app to their beloved De Blob series. The aptly named De Blob Revolution is a color revolution in the form of a fun, challenging puzzle game.

For those of you who are unfamiliar with De Blog original, it involves a hero named De Blob that goes around the town rescuing creatures called Graydians from destruction by INKT soldiers. You help De Blob bring back color to the beautiful Chroma City. In De Blob Revolution, you’ll go inside the different buildings you saw in the original De Blob and try to rescue as many Graydians as possible by finding the best route to exit the building. 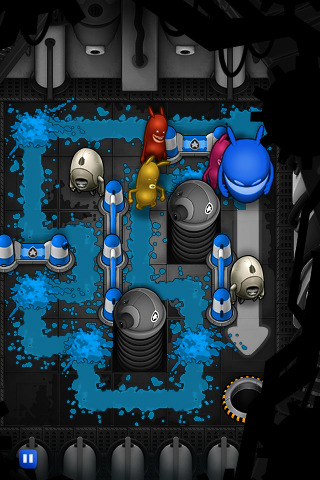 De Blob II is $1 to $2 more than your average puzzle game, but it also packs a lot more than the average puzzle game. At $2.99, it offers a good value. You’ll solve mazes under three different game modes and five difficulty levels. Control where De Blob travels by drawing or tapping on the screen with your finger. If you decide to cancel a route you’ve drawn, simply tap at the spot and De Blob will stop. Try and exit the building as fast as possible while saving as many (or all) of the Graydians you can and not backtrack. If you backtrack or cross your trail, you’ll have to start all over again. As you pass different levels, you’ll free different colored Graydians which unlock other difficulty levels. You’ll also get bonus points for timed, speedy escapes and playing levels with INKT agents chasing you.

Controls, audio, and graphics all contribute to make this one polished app. You’ll be able to easily pause the game, restart the building level, turn off the music and effects, and even read the help (instructions) while you’re in the level. The soundtrack and sound effects are varied and enhance gameplay. The graphics are sharp, colorful, and pleasing. Overall, this is a great game, and could be even better with some additional features. One of the things I’d love to see is an autosave function added to the game. This way, if I accidentally have to exit out, my last play is saved. I think online leaderboards would be another great addition. Integration with OpenFeint and adding achievements to unlock would also be more fun for players. Additional levels and difficulty levels with future updates would certainly be welcomed (as always).

For $2.99, De Blob Revolution will keep De Blob novices and pros entertained for hours. It’s definitely worth considering. Add this one to your app collection and pull it for those nights when you just want to stay in with a good puzzle.