Now, I don’t know what it’s like in other cities, but I never rode the bus to school. My elementary, junior high, and high schools were always within walking distance. Perhaps you had the experience of waking up early in the morning, standing at the bus stop, and waiting for the bus driver to pick you up. You probably didn’t face anything more dangerous on your ride than the driver making a sudden stop because a Scottish Terrier was scampering across the street. And it was certainly nothing like the school bus you’ll encounter XMB Xtreme Mountain Busing by Daniel Caldwell.

You’ll guide a pimped-up school bus full of children through rocky mountains, boulders, and violent geysers and try to get them to school on time. Along the way, you’ll encounter bullies that you can punish Southpark-style: just press a button to direct the stop sign at them and cause them to fly off the road. The 42 levels of gameplay (21 standard levels and 21 bonus levels you have to unlock) will offer many hours of fun. Those who lack the appreciation for lowbrow humor may be offended by the violent actions that occur. You have been warned. That just means more fun for the rest of us. 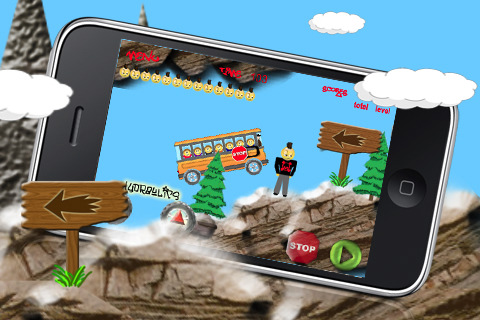 Controls are intuitive, but read the tutorial at the beginning just in case. Press the green forward button to move the bus forward. You’ll also press one of two buttons on the left side of your screen to control the hydraulics on your pimped-up school bus. This will help boost you across rocks, cliffs, etc. If you press the hydraulics button enough times while you’re pressing the green forward button, the bus will do wheelies on its front or back end–just be careful not to tip the bus over or game over. If the bus tips over, you’ve failed the school children and they will be safely released via ejector seats. Just try again.

XMB is great fun, but it won’t get any points for realism. The controls are easy and responsive, maybe even a little too responsive. It’s easy to correct the bus’s movement if it is tipped over a little too much. This makes the physics very unrealistic, but the game was never going for realism in the first place. What it scores points on is humor. The school bus is a twisted take on children’s doodles. The school bullies look like scary Pac men with bodies. The backgrounds are a different style with textured geographical features and colorful trees. The soundtrack and sound effects also add to the kitschy feeling game.

Developers could do a few things to improve the game. First of all, I’d like to see the sensitivity of controls be adjustable. This would go a long ways to making the game more challenging. Secondly, an autosave function or pause button would be a great addition. Thirdly, adding music to the introduction would start creating the mood of the game. Fourthly, additional obstacles, items, or bullies added to the game would be fun to push off the road. Finally, integration with something like OpenFeint to provide achievements to unlock and online leader boards would also make the game more addicting.

For the limited time offer of $0.99, the game offers oodles of fun and a fair amount of replay value. Strap yourself in and take the best bus ride of your life! If you’re not ready to commit, just download the lite version and test out 3 full levels of extreme fun.