Hey there, big fella. Been having trouble with the ladies? Wish there was an app to give you some companionship? Don’t mind if it’s entirely fake? Well, My Virtual Girlfriend is here to emptily fulfill your emotional needs.

You start off by telling the app a little bit about yourself and then what kind of girl you’re looking for. The app will then find you the three girls who most closely match your preferences. Most of the girls are attractive, some more than others, although they all look and sound like something out of The Sims. They also all have distinct, if rather shallow, personalities, so the way you respond to their questions will matter. The gold digger-type probably won’t like it if you’re disgusted by caviar and the wholesome-type will be thrilled if you say you want lots of kids, for example. 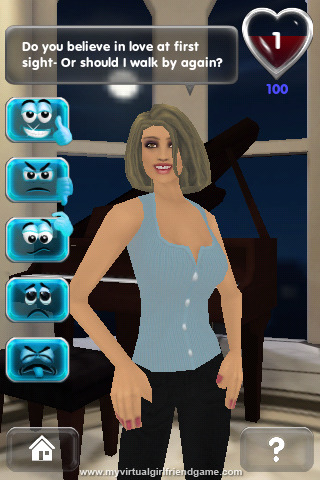 To help you fill your relationship experience bar and gain levels, you have your choice of Action, Activity, or Touch. Action covers things you can do around her, like hold hands or burp, Activity covers things like dates or going to work, and Touch lets you swipe your finger along her virtual body. Touch sounds rather risqué, especially since she won’t let you do it initially, but even if you succeed, it’s really nothing more exciting than a few delighted “oohs” as she clutches at herself demurely, while fully clothed. There are also “naughty” options at high levels, but those are equally disappointing for anyone hoping for something more salacious than a suggestive giggle.

Indeed, everything about My Virtual Girlfriend is all tease with no payoff. Despite a ton of dialogue options, gameplay gets very repetitive as there isn’t much to do and gaining levels is not at all satisfying, as there are only four, with very little difference between them. Trying to get a girl to dump you is actually as difficult as getting her to fall in love with you, but neither of these is very challenging. The girls are always different every time, but they’re painted in such broad stereotypes that I fear for the poor kid who thinks this is actually what having a girlfriend is like.

I recognize that as a straight girl, I’m not the target audience for this app, but I can’t imagine anyone over the age of 12 being terribly excited about My Virtual Girlfriend. All this effort at being a “sensitive” boyfriend and not even a bikini shot? You get way more action from a beer commercial. This is the kind of app you probably want to protect your children from, not because they’ll be corrupted by the messed up relationships the game promotes, but because they’ll be bored to tears by it. It looks and handles fine, and I suppose it’s okay for a laugh, but for anything else, you’d be better of hitting up a dating website or just buying an issue of Playboy.

Update:
– The girls have unique personalities, but with stereotypical womanlike behaviors.
– Interact with your virtual girlfriend : Expressive Emotes, Actions, Activities and by Touch.

This 3rd Party App is available at the Apple iTunes AppStore. Browse the full list of all AppStore apps filed under the AppStore category.
Download My Virtual Girlfriend at iTunes App Store
Price: $2.99
Developer: Website
AppSafari review of My Virtual Girlfriend was written by Tracy Yonemoto on May 20th, 2010 and categorized under App Store, Games. Page viewed 9150 times, 1 so far today. Need help on using these apps? Please read the Help Page.

8 Comments to “My Virtual Girlfriend”