Sheep shearers have a really tough gig. It’s incredibly hard work to wrestle a 150-pound ball of wool and muscle into place while you take a pair of clippers to it, but the end result is so comical looking, nobody really takes the job seriously. Instead of games in praise of the noble sheep shearer, we end up with all kinds of hilarious cartoon sheep running around as we frantically try to strip them of their wooly dignity.

Make no mistake, iShear has more sheep than you can shake a stick at. There are four different modes you can play in: Speed, Herd, Precision, and Magic. Speed has you trying to shear one sheep at a time, as quickly as you can, while it manically bounces around the screen. Herd gives you an equally manic group of sheep to shear. Precision is a lot like Herd, except you can’t touch an already shorn sheep, a very difficult task when they’re bouncing around like hyperactive springs. Magic introduces a magical fly and bee that will shrink the sheep or cause them to accelerate if you touch them. There is also a grasshopper that will give you some extra time if you catch him. Lots of options; lots of sheep.

I wouldn’t know the first thing about how to shear a real sheep, but this kid-friendly app makes it easy. Just a few taps and the former ball of fluff is left pink as a baby’s bottom. But be warned, these things are wicked fast, and it’s easy to get stuck chasing a half shorn sheep around the screen. You only get points for fully shorn sheep, but you can also boost your bonus score by tapping the flowers or grass which periodically grow in the field, although that wasn’t at all obvious to me at first.

Personally, I found the sheep a little too fast for my liking, and it made it difficult to evaluate if the touch controls were registering properly or not, but it does mean that you will always be launched right into action from the get go. There is no tutorial, and instructions are very brief, but it’s very easy to get the hang of things with a little experimentation. 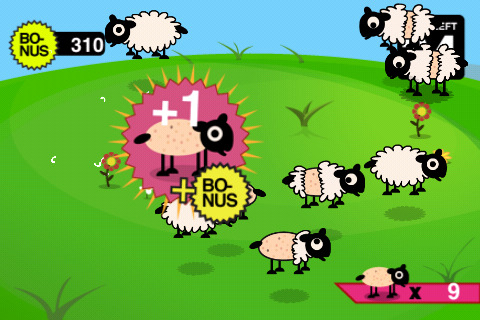 The cartoon graphics are a little on the generic side, but they’re very clean, clear, and will appeal to kids. I also enjoyed the appropriately bouncy sound effects and music, although you can’t play your own music, unfortunately. You also can’t pause or restart games, which I found rather irritating, but there are online leaderboards so you can test your mettle against other players, although there are no local high score boards, unfortunately.

Despite its overactive pace and a few missing features, I enjoyed iShear. It’s a charming ball of fluff that parents and kids alike can definitely get into, and for only $0.99, it’s definitely worth a look.

This 3rd Party App is available at the Apple iTunes AppStore. Browse the full list of all AppStore apps filed under the AppStore category.
Download iShear at iTunes App Store
Price: $0.99
Developer: Website
AppSafari review of iShear was written by Tracy Yonemoto on May 30th, 2010 and categorized under Action, App Store, Featured, Games. Page viewed 7037 times, 2 so far today. Need help on using these apps? Please read the Help Page.