Popular racing anime Initial D and blockbuster racing movies helped make “drifting” a household term (don’t try this at home, kids). Even the Mario Kart series has a drifting feature. Now Skiproach Studios brings you a game app called Drift ‘n’ Burn, a racing game that is all about drifting to beat your best race time.

Drift ‘n’ Burn is entirely a top-down view racing game, with five international racetracks and one practice track (inexplicably over Australia). The controls are faintly outlined on the bottom half of the screen. The left and right steering options are on the left side, while the accelerator and the brake/reverse are found on the right. A mini-map–a recent addition–can be seen on the top right corner of the screen, which was added because there are no point-of-view changes and thus upcoming curves are hard to anticipate. 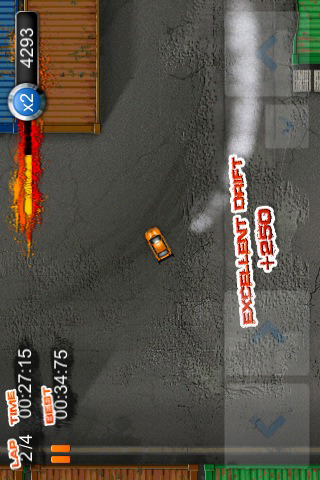 As you’re the only person on the racetrack, getting the best time is the objective of the game. Upon first launch, only the USA racetrack and the clockwise driving option are unlocked; all the other countries and the counter-clockwise options are locked until you earn enough points. Points are earned through displaying your drifting skills on the tracks and unlocking achievements, which you can view on the Select Track screen (on the bottom). Fulfilling all the achievement stars unlocks the Africa racetrack; be aware that some tracks are timed.

Drift ‘n’ Burn comes with all the requisite driving sound effects and soundtrack, with a graphics style more reminiscent of older games than newer. The controls were easy to figure out; however, the mini-map was virtually useless as it didn’t help me while racing at all. I liked the classic game throwback, but hated the top-down view. A top-down view while the car is essentially going south on the screen (the opposite way a driver is used to facing) requires you to reverse the steering controls, which was a hassle. Also, I don’t know if I’m the only one who experienced this, but the Free Practice section has never loaded for me–it always crashes the game. If you are in the market specifically for a drifting game, you could try this game app for $1.99 ($0.99 would be a better price); otherwise, there are better car racing apps out there.