A deck of cards is such a handy thing to have around. There are so many uses for it, including (but not limited to) building structures, sleight of hand, and perhaps most importantly, card games. There are thousands of card games out there to test your skills, both against yourself and against other people. Mü is one of them, a trick-taking card game invented by Frank Nestel that has now been made into an iPhone app by Steve Blanding (which was endorsed by Frank Nestel). 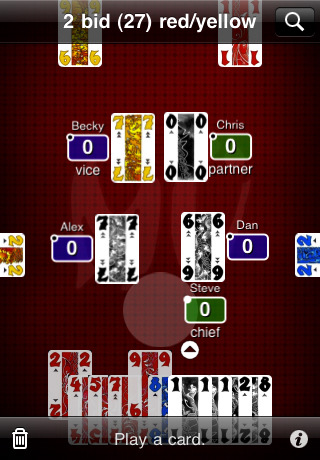 For those of us who don’t know how to play Mü (namely, me), there is not only a full-on manual with all the rules and explanations, but also a handy-dandy tutorial. Just tap the “i” button at the bottom right to access them, along with all the Settings menu. The Settings is where you can set up options such configuring game length/speed, player skill levels, and turning on Shake-A-Hint (just shake the device for a suggestion on your next move). You can have 4-6 players, including your real life friends–just connect over Bluetooth. You will be asked to choose the number of players you want at the start of a new game.

Mü is a complex 60-card game similar to Bridge or Hearts: with each hand players partner, bid, and score points based on the cards won. A player wins when he or she reaches the predetermined score, but partnerships and trump suits change with every hand and bidding. If you rotate the device to a landscape position, you can see the score sheet of the game you’re in. This app also tracks the statistics of all the games played. Mü is not exactly a beginner’s game, as it requires a thorough scrutinizing of the rules before you even start a game. There’s plenty of strategizing to be had, so you’d best be prepared to think hard before spending $2.99.