It’s almost hard to believe this is an entirely new game, as it stands up with the best of the classic 90’s adventure games, albeit more on the side of Leisure Suit Larry than King’s Quest. Brilliant animation and terrific voice acting make Hector an exceptionally polished stand out. In a similar style to the Sam & Max series, but far dirtier and grittier, the game is so risque, it’s almost surprising that Apple approved it at all, but how we are very fortunate they did. Hector is well-worth playing, with all the drugs, booze, prostitutes, and gore intact. 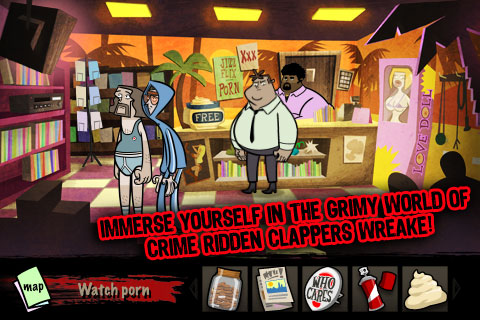 When a trigger-happy gunman sets up in the middle of town and starts blowing the heads off of police negotiators, there’s only one man for the job: Detective Inspector Hector. Unfortunately, the fat slob has managed to lose his pants and get locked into one of the station cells after a night of heavy drinking, so you must help him get free, get dressed, and get to work.

Like any standard adventure game, there are loads of obstacles to overcome, usually in the form of puzzles requiring a specific combination of items. Happily, the controls are beautifully smooth, so picking up and using items is nicely intuitive, although swiping to move Hector can take a little getting used to. Thousands of lines of deliciously snarky dialogue keep the action zipping along at a brisk pace, but the hint system is essentially nonexistent in the beginning, so you may find yourself stuck at times. Just remember, banging your head against a wall and systematically trying to combine every item that comes your way is practically a tradition for the genre, so adventure fans may see this as a feature rather than a bug.

Truth be told, the only real downside I encountered with the game was the relatively brief playing time, just a few hours, but you should take that as a testament to how good the game is, because after the cliffhanger ending, I was craving more. Although the game could have easily become a tasteless mess of sex jokes, the writing is really top notch with a killer sense of humor, backed up by some truly superb voice acting.

Children and the easily offended need not apply, but if you’re a fan of mildly naughty, but gloriously witty and beautifully animated adventure games, absolutely and without a doubt give Hector: Badge of Carnage a try.

Here is a video demo of the Hector: Badge of Carnage Ep 1 app on the iPhone