Humans have been domesticating animals for thousands of years. All the way from poodles to Pokemon, there’s always been a deep-seated urge to bond with animals, and Beast Farmer sets out to satisfy that primal impulse on the iPhone for free.

Beast Farmer: Swamp Chicken Edition makes you the proud owner of a bizarre bird creature that looks more like a velociraptor than a parakeet. You’re responsible for raising the little critter from egg to full-grown battle beast, and that means feeding and training. 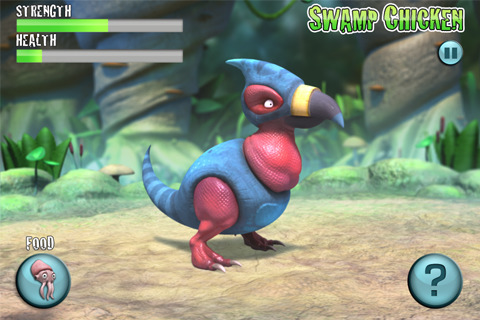 The app is broken down into two parts, interaction and mini-games. Interaction lets you play directly with the Swamp Chicken. You can feed it or use different swipe commands to have it do tricks, filling up two separate progress bars. Fill the bars completely and your beast will mature and change form. There are three different maturity levels, each of which unlocks a new mini-game.

The mini-games are how you earn food for your little beastling. Once you’ve busted the ugly swamp spawn out of its shell, you can catch glowing flies for it as a baby, race it through the swamps as an adolescent, or enter it into one-on-one combat as a full-grown adult. Your reward, if successful, is a fresh cache of floppy squid, a Swamp Chicken’s favorite food. You can play the mini-games as many times as you want, but games don’t unlock until your beast has reached the appropriate maturity level, so you can’t neglect the interaction aspect.

There’s a surprising amount of variety in the game, but unfortunately, the implementation is less than stellar, and the controls are really pretty abysmal. Interacting with the Swamp Chicken requires a lot of luck and half a dozen swipes before a command registers, and the mini-games are wildly uneven and repetitive. If you’re lucky, you can quickly zip through them without much challenge, but if you’re unlucky, you could be futilely stabbing at the screen for awhile. I was eventually able to take a beast from egg to adult in about an hour without a lot of effort, but it wasn’t a lot of fun.

The game documentation is also rather lacking. Slogging through the help screens was slow and mostly unhelpful, and there wasn’t very little information to be found for the mini-games. For the most part, they’re straightforward, but it was frustrating to suddenly encounter an awkward combination of tilt and touch controls, without any warning. There is a practice mode, but it’s effectively identical to the regular mode, and with no online competition or even local stats being stored, I wasn’t entirely sure what the point was.

I imagine that the developers will be releasing more beasts to farm in the future, but as it stands, the Swamp Chicken Edition is a bit of a dud. It’s a very ambitious project with a lot of variety and graphics and sound that are actually quite nice, but the poor controls render Beast Farmer almost unplayable. It’s one major saving grace is the price, free, which means there’s little risk in trying it out. It’s far from perfect, but it’s cheap enough to make it a reasonable diversion for a few minutes.