As many of you may know or even identify with, the game World of Warcraft has been a social phenomenon since its creation in 2001, transcending age, gender, and cultural barriers. The iPhone application iPudge, developed by Ran Zhang Website for the iPhone, iPad, and iPod Touch is an attempt to reign in WoW’s widespread popularity. My first response to this game was, “WHAT IS THE POINT?!” As I began playing more a strange thing began to happen though. I’d be waiting in traffic or sitting around at home, and suddenly get the sensation to play it. 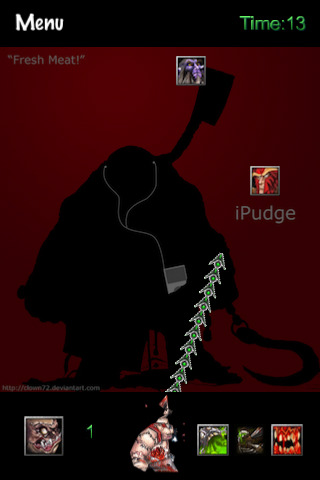 My initial aversion to the app came from it’s convoluted instructions under the label “Helps,” which did nothing more than give unhelpful accounts of the four methods in which you are supposed to catch the icons that drop from the proverbial sky. The mission of the game is to click on each icon as they fall (each at different speeds) before they hit the ground. If they hit, you lose a point, if you catch them, you gain one. At the bottom of the screen is a bar with each method that you can use to slow or quicken the pace of the oncoming traffic. Unfortunately, it is hard to balance both tasks at hand, and often the game is over before understanding it’s intended purpose. What is the concept? Are there levels? My assessment is that there are not levels and that skill is based on the longevity of each game. The more I played, the longer it took for these falling icons to defeat me. As I got better, I finally understood the high score chart displayed at the end of the game too. Though I’m still uncertain about how your points are tallied up, I realized that by climbing the chain of scores I was achieving certain statuses. The top status is titled “Holy Shit” and you must obtain at least 10, 000 points to earn it. Below is the status “God Like,” followed by “Monster kill” and so on. I am at the eighth rung of this chain so far, one place above “Killing Spree” and one under “Dominating.” Clearly, I still have a lot of work to do if I want to make more progress with my skills, but I’m pretty satisfied with my current score of 109 points. While I’m no master of the trade, I’m almost “dominating” the game and in the meantime, the game has dominated my free time. Give it a try. It is fun, it is cheap–only $1.99–and it is pretty addictive. If you’re a WoW fan you will either fall in love with this app or condemn it as an impostor, but chances are you’ll be addicted to it either way.