Usually I work pretty well under pressure, but games like Fare City are the reason I know I could never handle a super-high stress job like air traffic controller or 911 dispatch.

In Fare City, you direct a fleet of cabs around town, conducting them in a delicate urban symphony of passengers and traffic. I’m guessing most of you could handle the action just fine, but when things started to get a little too crazy, my brain just locked up as everything gradually fell apart in a series of spectacular slow-motion crashes and endless loops. It was kind of fun to watch, but, saints preserve us, can you imagine the carnage and inflated fares if I were shuttling around real taxis?

A line drawing game in the same vein as Flight Control, this is a rich, bite-sized nugget of manic fun. To play, you simply draw lines from cabs to pick up fares and take them to their color-coded destinations in a timely manner. Once you’ve dropped them off, you start the whole process over again.

Now, this is easy enough with one or two cabs, but gradually more and more are introduced, until soon enough your eyes are crossing and you’ve lost all sense of time and space. The map also loops, so driving off one edge of the map causes the cab to reemerge on the other side, an interesting feature that will likely delight and/or madden you. Taxis can also collide if you’re not paying attention, so it pays to keep a vigilant eye open. To safeguard against the inevitable mayhem and destruction, you can also use some of your hard-earned cash to purchase additional “insurance policies” (lives) to keep your fleet in tiptop shape. 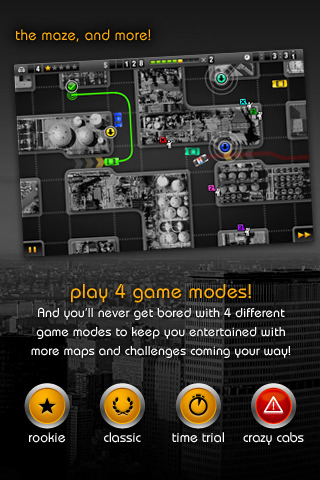 With a clean and spare interface and buttery smooth controls, gameplay feels very natural and intuitive. I especially loved the fantastically jazzy soundtrack and slick neon light trails emitted by fare-ladden cabs. The overall vibe felt a little like Sinatra meets TRON, but in a good way. It’s surprisingly hard to make a casual game look sleek and streamlined, but Fare City has style in spades.

6 different maps and 4 game modes means that there’s plenty of variety to choose from, and you can scale the game speed to your liking, with room for improvement. I’m usually no good at this kind of thing, but even my stubby butterfingers were getting it after awhile, and if you’re already a fan of games like Flight Control, this will only feed your addiction, and you’ll start dreaming about rush hour instead of staring at the skies.

Here is a video demo of the Fare City: Taxi Mania app on the iPhone