With a much welcomed price drop to $2.99 from the original iPad only price of $7.99, this totally overhauled and newly universal sequel to the massively popular Zen Bound is a serious triumph of technical wizardry and aesthetic brilliance.

Less a game and more an experience, Zen Bound 2 doesn’t deviate far from developer Secret Exit’s original formula of wrapping wooden objects with rope to paint them. You get one wooden model per level and levels are split up amongst various trees, with each tree often having a particular theme. You earn flowers depending on how much of the model you paint, and flowers unlock new levels and trees. There are no time limits involved, so each level feels almost like a therapeutic exercise, and the fluid physics engine and beautifully responsive controls help to maintain this deeply sensual illusion. 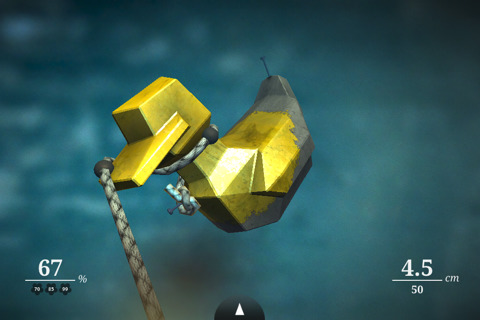 The game’s simple and relaxed nature results in an experience that is very tranquil and almost tactile. Models are highly detailed, almost to the point of photorealism, and the general sensation of rotating the object is highly immersive and engrossing. If you didn’t enjoy the first Zen Bound, the sequel isn’t likely to win you over, but old fans and many new users will be delighted by the smoothly improved technical performance and characteristically jaw-dropping visuals.

Beyond adding more models, there’s not very much by way of new content, but one major gameplay difference from the original includes a “paint bomb” mode during certain levels. These “bombs” are either attached to the rope or nails studded across the wooden model. Manage to touch one to the surface or hit it with the rope, and it will explode in a colored splatter across a portion of the surface. This does take away a little from the overall serenity of the game, but this may be either a plus or a minus depending on your playing style. In particular, I can see fans of the original being slightly disappointed by this new feature, although I personally appreciated the bit of innovation.

Zen Bound 2’s newly “universal” status means graphics quality is going to be dependent on the ability of your device, and while iPad and iPhone 4 users are the luckiest ones, thanks to Retina optimization, even on my 3GS, the visuals were nothing less than outstanding. Zen Bound 2 also features some of the best in-game music I’ve encountered, with almost an hour of soothing original music, also available for download from Secret Exit’s website.

With the new optimization and fresh achievements added, there’s really not much to criticize about the game. The only real downside is that it hasn’t really innovated beyond the original, so the content feels markedly less novel the second time around, but the game itself is a definite improvement in almost every respect. If you’re looking for an app to really test the full potential of your iDevice, then Zen Bound 2 Universal is a very worthwhile and sensually pleasing experience.