Unsurprisingly, my first thought upon encountering this adventurously titled app was “What the heck is a SimSimi Choochoo?” Turns out, it’s a saccharine twist on the classic Snake game, populated by painfully adorable blobs called Simsimis. Stringing them all together in a line makes the titular “Choochoo”, a phrase which I’m fairly certain can cause certain adult braincells to implode.

It’s not easy bringing originality into a classic and incredibly basic game, but I was impressed by the amount of effort that went into making this rather geriatric game concept appear fresh again, although execution is just not quite where it needs to be. 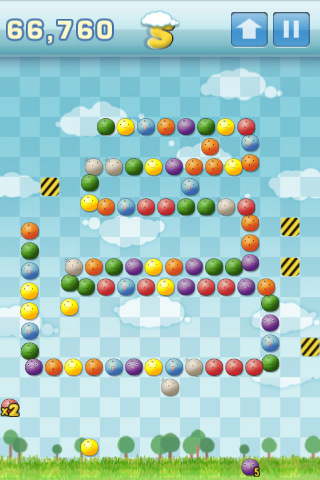 The graphic style of the game is a little on the sweet side for my taste, but the overt cuteness is a far cry from the pixelated retro Snake clones I am more used to. Not my scene, but a nice change of pace nevertheless, and the colorful Simsimis have a lot more character than the average Snake segments. For the most part, they’re all identical aside from color, but some Simsimis come with a countdown that changes them into an immovable block if they are not collected in time. There are also some that slow you down for ease of navigation or ones that grant special score bonus.

Now, the big problem with the game isn’t the Simsimis, but the touch interface directing your “choochoo”. To turn, you merely swipe in the appropriate direction, and since this is a Snake clone, you must time everything carefully to avoid running into walls, barriers, or your own back end. Unfortunately, the controls aren’t anywhere near sensitive enough to allow for the hairpin turns required. Precision is key, and unless you have exceptionally tiny and dexterous fingers, you’re going to end up blocking your own view and cursing the unresponsive controls an awful lot.

Other issues the game faces are minor, but noticeable enough to warrant comment. The game is solely played in portrait mode, which doesn’t seem like a big deal, but the extra width afforded by landscape mode would have helped with the inadequate swipe room. The tutorial is also in need of a serious going over by a native English speaker. Admittedly, the game isn’t very hard to pick up through some brief experimentation, but it would be nice to have an area that clearly addresses the particular game quirks in store.

All that aside, the game doesn’t really offer much variation, so you end up chasing the high score by playing the same screen over and over again. There are lots of endless games out there, but the successful ones do their best to offer subtle changes now and again to keep the action feeling fresh. In the case of SIMSIMI CHOOCHOO, it feels a lot like the same old thing with a sleek makeover and shoddy controls. When you pick up a Snake-clone, you probably aren’t expecting a lot, which means that the few things on offer should be perfect, and unfortunately, this cutesy bit of fluff falls a little flat.