Micro Rally is a top-down racing game that is reminiscent of the old NES RC Pro-AM game where you steer left and right while trying to follow the track and get into first place by swerving and short-cutting the competition.

The start shows you an audio off and audio on selection screen. I now demand that ALL apps come with this feature because this is the most convenient feature I have ever gotten. You have no idea how loud an app will be or what ridiculous sounds might come from it, so this is an awesome addition even though it’s so very simple. From there, you can hit the Buy Now button to access the iTunes page to download LilRacerz Pro Rally or just play the demo. 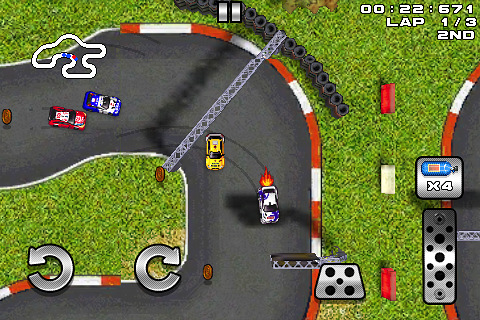 This version of the game contains two tracks and two cars, with only one track and one car unlocked from the beginning. The sound track is reminiscent of the old bit-era games with its midi-like notes and the sounds of the vehicles all are well and good. The graphics are a bit off. Both tracks have weird texture compression artifacts and look like they zoomed in on a jpeg image. It’s kind of ugly. The cars look nice and the interface is alright, but man, the controls are frustrating… which lead to—

Gameplay for this game can be fun, like drifting around corners and cutting off your CPU opponents, but then other times, it’s endlessly frustrating and explosively infuriating. I’ve lost so many times because my thumb didn’t land on one of the two very distant left turn/right turn buttons on the screen and crashed into a rock… and oh man, when you hit a hard object, it’s over. Race is done for you. The time it takes to reverse back, start moving forward, and then getting back on track is enough drive you into insanity after losing –again- to the same control issue.

The boost doesn’t work well for the first car available to you and the speed difference is barely noticeable. The controls are probably the worst part of the game. Maybe if they set the two turn directions closer it would be more easy to control since there wouldn’t be a huge gap in between the two buttons, leaving room to crash hard into a wall.

Besides that, there are graphical touches like being able to run over people (which is random and oddly unrealistic since I’m sure you’d be arrested right away rather than being able to finish a race), and the 3D elements are alright, though again, they are all super blurry as if all the textures were hard compressed. I’m sure they could have used better textures and still had the game run smoothly. Maybe it’s just because it’s a demo?

Overall, I had fun until the controls got me 5th and 4th so often. This game’s controls are ancient and is in desperate need for revision. LilRacerz Micro Rally is a the lite version of LilRacerz Pro Rally and sadly this is not mentioned in the iTunes description (8/11/2010), but this app is free and available for the iPhone, iPod touch, and iPad and is released by Blast One. If the demo is any indication of the full game, I wouldn’t buy the Pro version.