You are a space marine battling against legions of aliens. Despite, or even because of, this game’s inspiration off games like Gears of War, Doom, Starcraft, Lost Planet, Killzone, Halo, Resistance, Crysis, Singularity—this game contains great appeal. This app is a top-down shooter arcade game that is based on going as far into the game as possible to get the highest score. Released by Playus Soft, Creatures – The First Blood is an Openfeint enabled app for the iPhone and iPod touch. 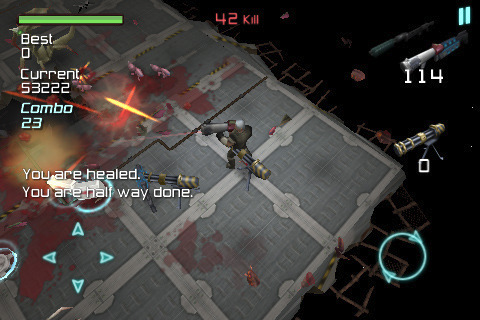 This game uses the two-joystick control system for running in any direction while firing in any direction. It’s a strong system and work perfectly for fast and intense shooter gameplay. There are two different shooter levels in this game. First is the standard top-down shooter where enemies swarm in on all sides and attack you. You kill them to get special items, new guns, or health packs and after killing enough enemies, you have to run to the portal to complete the level before you get ripped apart by the infinitely respawning enemies. The second level type is the a bit more unique. There is a giant spike wall behind you and you are trapped in by a barricade. Monsters swarm into the barricade and try to push it towards the spike wall. If they push it too much, you get a lovely spikey death.

Both gameplay styles are fast and visceral. The enemies change as you progress through the levels and you’ll quickly find your favorite weapons. My personal favorite is the shotgun that fires in 3 directions. It’s invaluable during the spike-wall levels and can save you from being surrounded while in the top-down levels. The weapons are great in this game, each with a unique play style that really changes the pace of the game. 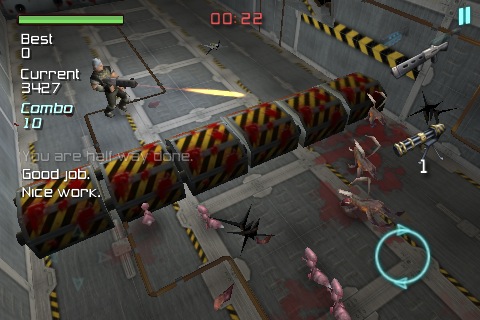 The 3D is genuinely great, though repetitive. The top-down level has a floating metal platform with destroyed rebar and panels. It’s the same level you’ll see for the rest of the game, even on higher levels. On the spike-wall level, it’s the exact same textures. Like the games I mentioned before, the levels get repetitive inside this cyber-tech metal arena. Ever notice how every futuristic ship is just filled with metal? No rugs or carpeting for comfortable living? Guess not.

Sound is mostly drowned out by gunfire and aliens, but it works. Instead of spoken dialog from our main character, you have little text scrolls of our marine’s thoughts. “Nice work,” “Goodjob,” and “I don’t want to die” are common.

I would absolutely love a full dedicated story with this type of gameplay in mind. It could have a simple story with different levels to walk through. Something like a Dead Space mixed with Diablo but a bit more simple and straightforward. How awesome would that be!? I like this game for its challenge, the weapons, and the 3D. With a bit more healthpacks and more ammo, I could really go all out.