Years ago when I first heard about Line Rider, after about a hundred or so hours of fascination, I learned that the game was incredible. Line Rider Racing takes the original Line Rider game, created some new themes, background elements, and decorations, and adds a racing element to it. Line Rider Racing! Is brought to us by inXile Entertainmnent and is available for $0.99 on the iPhone, iPod touch, and iPad.

Line Rider Racing is a racing game based in the Line Rider world. You have a time trial game and a multiplayer mode. Time Trial has 3 modes in itself; the Random Track Challenge, Local Tracks, and Online Tracks. Both Local and Online has you play premade levels, either from other people or from your own creations. Random Track Challenge is the main single player mode of the game. 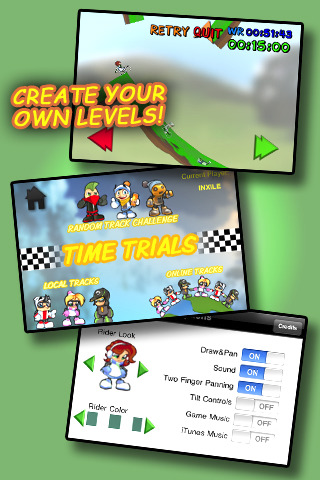 You race against 3 others and the track is automatically created right in front of you. It’s quite amazing to see the track being formed and each time is always different. Sometimes, it will create some rather boring tracks to play. Straight lines and downward slopes? Luckily, you’ll come across those really well flowing tracks that are interesting and challenging.

Multiplayer has you go up against other players, but at the time of my review, literally no one was online playing. I stayed in that Lobby for about 2 hours and decided it wasn’t going to have anyone join my game so I went to the final game-mode: Track Edit.

Track Edit is the mode that any Line Rider game almost requires. This is the mode that most closely relates to the original game. You drag your finger to create tracks that you can play test over and over again, allowing you to create insanely complex levels of your own to play in the Local Tracks mode.

There are some minor graphic changes that you can make involving your tiny rider but the tracks and backgrounds are the biggest parts of the graphics. Most of it is well done with really nice clean drawings, though the tracks can look a bit weird. The music is nice with a techno theme to it. Controls have some issues with how sensitive the tilting is at times and there are some issues with the track collision itself since your character will fall apart at random just because of some small lump in the road or whatever. 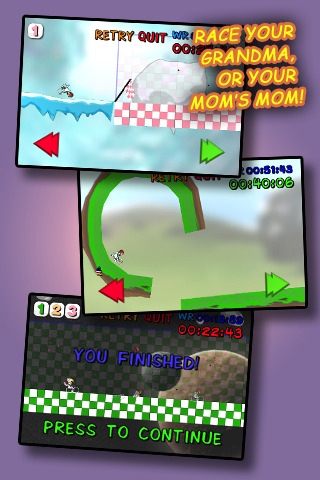 Line Rider Racing makes it impossible to recover after you fall off the track via crashing or landing improperly. The delay between recovering and the length of most tracks will pretty much assure that you will never catch up in time to be anywhere near 2nd. It’s annoying to hit one of those random bumps and losing without a second chance.

Besides some recovering issues, the game looks nice, sounds nice, but really could use more gameplay options. Maybe some more fully built levels that are epic and complex? Maybe some achievements to get or themes to unlock? The game is pretty average in general, but the Track edit mode is still immense and has endless possibilities. This is a great app for those of us who love the customizing in all Line Rider games. Pick this one up if you want some more Line Rider fun.

Note: The Flash version of the Line Rider game can still be played online as well, from your MAC or PC.

Here is a video demo of the Line Rider Racing! app on the iPhone