In the crowded world of word puzzles, Cryptogram is about as simple and elegant a game as you can get. Instead of cartoon worm mascots and exploding letters, developer Norman Basham appears to have taken the adage “Simple is best” to heart by presenting a very basic puzzle concept that is flawlessly executed.

A cryptogram is a short message of encrypted text, generally consisting of simple letter substitution cipher. For example, the word “PUZZLE” might look like “JWKKAQ” before decryption, where every letter is replaced by a different letter. Usually the text is longer than just a word, and the app Cryptogram generates random cryptograms of famous sayings. That’s pretty much all it does, but despite the lack of fancy features, the app never feels lacking. 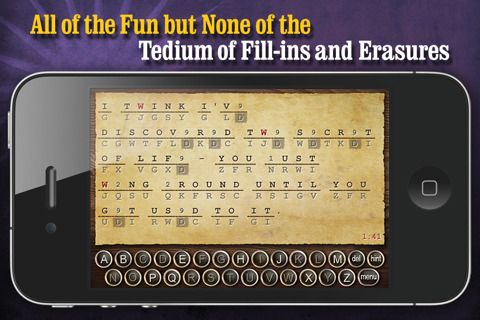 Part of the reason this bare bones approach works so well for Cryptogram is the gorgeous presentation. The interface is laid out like an antique typewriter, complete with rich sound effects and beautiful vintage fonts, and it’s dead simple to use and works perfectly. The classy old-fashioned style of the beautifully crisp Retina-optimized display really heightens the experience of cracking a code by hand and puts you in touch with your inner Sherlock Holmes.

About the only concession to modernity is the option to post your solved quotes to Facebook, which is understandable, as many of the quotes are appealingly witty or wise and worthy of sharing, and there are oodles of them. 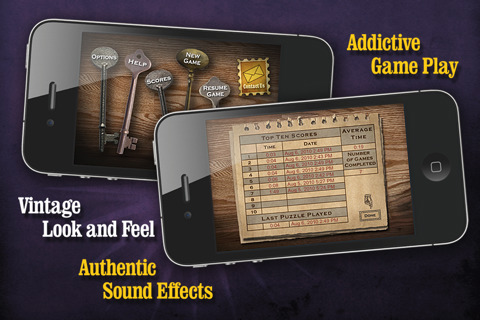 There are no difficulty levels to select from, but you can tweak the settings a bit to adjust the relative challenge. You can choose whether or not you want to display the letter frequency or indicate when you’ve substituted the wrong letter. There’s also a handy hint button for when you’re well and truly stumped. The app also keeps track of your solving times on a local high score board. I would have liked to have seen online scoring as well and an option to create multiple local accounts, but these are minor complaints at best.

Cryptogram doesn’t come with a lot of features, and it’s not the kind of app that will keep you engrossed for hours on end, but like a crossword puzzle, it’s a handy and laid back mental challenge that is perfect for killing a bit of time. Thanks to the stunning HD display of polished wood and brass, you’ll feel like a suave and sophisticated 19th century intellectual. Cryptogram has all the old-timey appeal of steampunk with none of the extraneous gears and gizmos-just pure, clean puzzling fun.