Released by JAHLGREN Ab, Speed Maze is a finger-guided tracking challenge game where you try to complete multiple mazes in record time. Available on the iPhone and iPod touch, this game app will cost you $0.99, but only for a limited time (at the time of writing). The original price is $1.99, so pick it up while it’s a low!

To play the game, you drag your finger along a path. If you lift off the path, the path won’t break so you have to return to the path and start where you left off. Your goal is to make it to the yellow goal from the white starting point as fast as possible. The maze itself looks nice and clean with clear indicators for the start and end of the level and what you are supposed to do when your hit a path blocker like the ‘shake your iDevice’ blocker or the ‘tap me’ button that are laid out on certain levels.

There isn’t much to mention in terms of sound but the game still feels bombastic due to the particle effects of the maze disappearing as you drag your finger and when you hit the path blockers. The game does feel lacking however. There isn’t much incentive to play more than once since your total score is only recorded locally. Even with friends, this is a one-time game that lasts about 2-3 minutes at most. 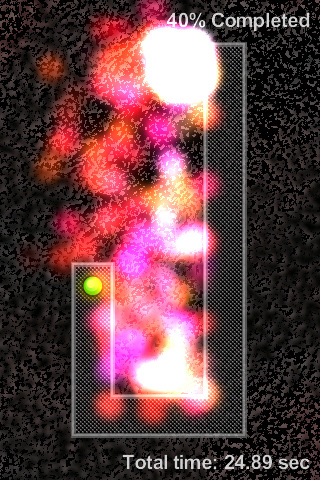 The background image is not pretty. It really doesn’t have an appealing feel to it, pretty much looking like a Photoshop image that is way over filtered. I would much rather see a black-gray gradient background instead of this splotchy black image. The icon of the app has a much more appealing rain-bow effect over a metal grate pattern. Much more appealing in my opinion.

The path blockers are fun little interruptions and add a bit of challenge to most of the levels that they are on, but I can’t help but feel like there should be more. As much as I wanted to like this app, I feel very strongly that it’s just not replayable after your run the maze once. I want to see more challenges. Maybe a stage with two beginnings so you have to multitask two fingers? Maybe more levels with more path blocker varieties?

Speed Maze is, in my opinion, currently worth the $0.99 but I wouldn’t pay another dollar yet. This is still a very new app however, so I will not fault FAHLGREN Ab for its growing pains. It takes time and reviews to get better, so give them feedback by playing the game. Speed Maze is a very nice start to a potential hit, it just needs some more love. I’m giving this an average rating, but don’t get me wrong, it is still enjoyable while it lasted.