Ed and Fred are movers. Their job is to move your stuff. They have jobs all over the world and it’s up to you to help them make as much money as possible… too bad they are unbelievably incompetent and instead of moving objects down stairs or elevators, they have the items tossed out of the window and they bounce them into the truck via towel. Thanks guys… remind me to just rent a truck to move my computer and television. The Movers is a game app developed by Abyss Studios on the iPhone, iPod touch, and iPad for $2.99 (on sale for a limited time for $0.99).

Humor is strong in this game. The characters are well designed and have silly proportions, backgrounds are hyper-stylized, and the items that drop are nice little references to each and every area. It’s actually really nice to see that they spent so much time making location-based items each level. My personal favorite and an image from the iTunes store preview is the Stormtrooper Space bonus level. Just a great reference that showcases the silly fun nature of the game. 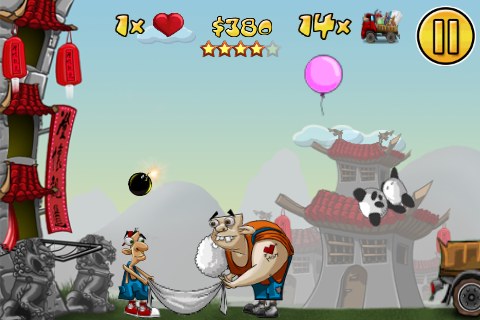 The music is very well done and fits the theme well. Sound effects of the bouncing, breaking, collecting, and failing all work great and the overall presentation are pretty good. I liked the style and the art direction that The Movers takes.

You move the two around by touching buttons on the sides of the screen which goes invisible after your fingers rest on them. You have to get the items to land somewhere on the towel to bounce it into the truck on the right side of the screen. The objects bounce with a variety of different speeds, distances, and some require two, sometimes more, bounces to get to the truck safely. Each successful collection garners you money that att he moment does nothing other than increase your score for posting on Facebook. 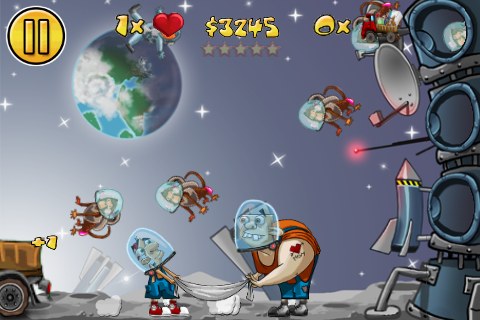 Overall, the style is really solid and the gameplay is simple to learn but challenging to master. It really does earn its price tag’s worth because of just how many objects come falling out of those buildings, all the levels, and the really nice art design. This is a first version release at the time of writing, so hopefully in future updates, we’ll be able to purchase things using the money we gather. I realize it’s for a highscore system, but honestly, if you wanted high scores, give us points and separate them from the money. When I think money, I think of what I can spend it on. Maybe purchase slightly larger towels to catch objects with? Maybe helmets that also bounce the objects into the truck? Maybe just cosmetic stuff like new outfits, new levels, or new objects?

I had a good time with The Movers and was surprised by art. The game works nicely, the sounds are fun and fitting, and the gameplay is just as good as when Earthworm Jim did it. For what it is, it’s almost perfect. All it needs now is some more levels and maybe a store to spend your cash. Nice move, Abyss Studios.