Let me just state my own ignorance: I have no idea what a Matryoshka is. Apparently, it’s one of those Russian dolls without all the progressively smaller ones inside of it. iMatryoshka, besides being difficult to type out, is a game where you connect the top with the bottom, matching paint jobs and designs. Relased by Kulgavtsev Igor, iMatryoshka is available on the iPhone, iPod touch, and iPad and is a universal app.

The game sounds simple. You touch one end of the Matryoshka, touch the other end, and attempt to drag them together in the correct angle to make them puff into smoke. Repeat. There are 2 game modes, with one that has all the Matryoshka smiling, and one with them angry and there are bombs that randomly generate. 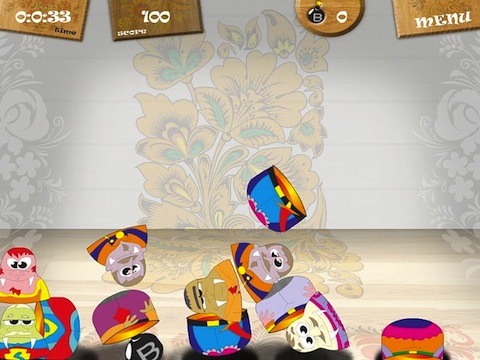 My honest opinion is that this game is fun… for the first 2 levels. You are still learning the mechanics of the game so you are more open to having the controls be awkward and foreign to what you are used to; after all, it is your first time playing. Once you realize that the awkwardness never goes away and that the mechanics for matching the shapes together are fundamentally flawed, it really takes the fun away. I let myself play this game for multiple levels and handed it over to my girlfriend to try. We shared the same agreement… we don’t get it.

The tutorial is a single screen of text telling you a rough description of how to play. The text is very small on the iPhone display but it’s also a clunky, messy font style that is very hard to read. The timer is small and in the corner, which doesn’t present any real sense of urgency or motivation, the scoring system leads nowhere, and the second they drop more dolls on the screen after you cleared a ‘stage’ it gets rather frustrating since the game doesn’t reward you for successful combinations, it just drops more dolls on you.

I am probably not the right person to talk about Matryoshka or this game. I’m sure out there, there are Matryoshka fans who would love putting them together like a toy factory employee, and don’t get me wrong, the art for the background is very stylish and elegant and the dolls themselves are a certain appeal to them, but this is not for me or my cultural background, so take that with a grain of salt.

A decent app game, i Matryoshka has a nice art style but loose and fumbly controls, a strange choice of text font, and presents an overly subtle sense of motivation to continue playing it… but I know for a fact that this HAS to be aimed at a specific market. A market that I just don’t get.