And the Apple gods said, Let there be light: and there was LightPoint, illuminating the App Store with its puzzles. A strategic game that relies mostly on a sharp memory and buckets of luck, LightPoint is a puzzler that plays like the awkward lovechild of Minesweeper and a Lite-Brite.

You start with a glowing orb on an empty grid. You can move the orb to surrounding squares to light them up, and while the “How to Play” tutorial is painfully confusing, the main thing to remember is that hidden in each square are good runes and bad runes. Unsurprisingly, you want to light up good runes and avoid bad ones. To figure out which is which, you have to activate your handy “lightpoints” in the right hand corner. 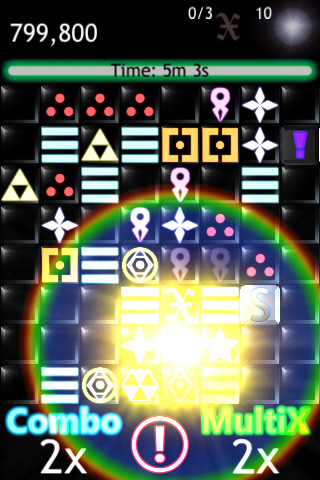 A lightpoint lets you see what rune a square has on it, but you have a limited number of lightpoints, so it’s in your best interests to use them as sparingly as you can. As you progress through the levels, the grid gets bigger, and special squares start to show up, but the basic premise is still “Light up the good squares, avoid the bad ones.”

While the game is somewhat interesting and even a little addictive, it comes saddled with some pretty major flaws. As I mentioned earlier, the tutorial is awfully cluttered, making it very tough to get into the initial swing of things. To compensate for this, the first levels are very forgiving, but this backfires once you do get the hang of the game. Because there’s no level selection built in, you’re now forced to slog through the wretchedly hand-holding initial levels every time you play, which becomes doubly annoying when you realize the game doesn’t pick up where you left off, and you’re forced to replay all the earlier levels each time you quit. 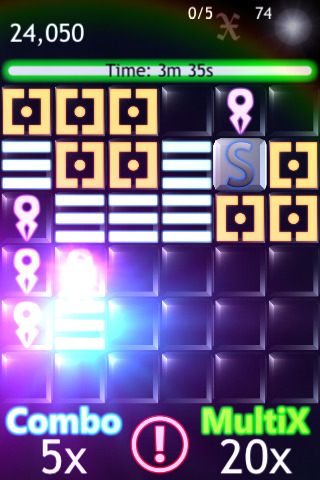 Thankfully, each grid is randomly generated, and there are dozens of levels, so the game is different every time, but it still takes much too long before things start to feel challenging when you start anew. You have the option to ramp up the difficulty level, but beyond that, there is only one primary playing mode, but there are online leaderboards and Facebook integration to let you flex your competitive muscles.

Aesthetically, the game has very sharp HD, Retina-ready graphics and a lush electronic soundtrack to keep your attention focused, but the annoyingly cluttered and ugly pop-up alerts between levels take away from the otherwise attractive and dreamy atmosphere. Loading times between levels also feel sluggish and drag down the brisk flow of gameplay.

Overall, it’s not a bad game, but it’s missing the vital polish in a few areas that it needs to shine, namely the lack of level selection, the cluttered menus, and the confusing tutorial. Without those key elements addressed, the game just comes across as too complicated and frustrating, but otherwise, the premise is sound, if not outstanding, and the look and feel of the game are top-notch.