Jewel Quest, the popular match-3 series with the globe-trotting, Indiana Jones flair, has made its way to the App Store. It’s basically the same match-3 action you know and love, although I’m sad to report that it seems to have lost some of its sparkle in translation.

Match-3 games are always tough, since there are so very many of them, all clawing from attention. After awhile, they have an unfortunate tendency to meld together into one blurred, dull grid of unending matches. Jewel Quest is one of the early heavies of the industry though, so I’m willing to cut it a little slack, since along with Bejeweled, it helped kick off all this madness. 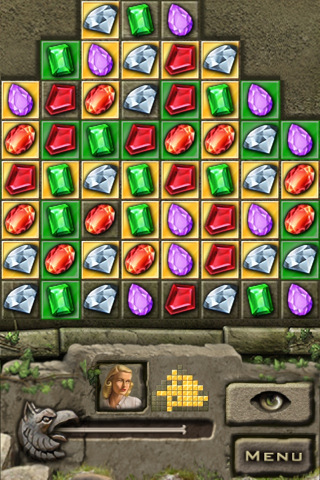 The story, which is related through easily overlooked and often ignored journal entries, tells the sad tale of museum curators Rupert and Emma, and their darling daughter Natalie who goes blind after playing with a mysterious artifact, and now they have to save her, yadda yadda yadda, you get the picture.

Gameplay is about what you’d expect. There are lots of jewels and random objects in an interestingly shaped grid, just waiting to be swapped into a match. The goal is primarily to make a match in every square on the grid before your time runs out, but different levels come with some additional complications. For example, some of the levels pit you against an opponent, so it’s a race to make more matches before they can knock you out. Other levels come with special blocks that require some careful fussing if you want to get them out of the way.

The relative difficulty of these levels seems to vary wildly, which is really quite irritating at times. The levels seem mostly straightforward, but every once in awhile everything goes haywire and you’re left gnashing your teeth while time runs out over and over again. It’s not the kind of experience I generally associate with lightweight casual games, and it was unfortunate to find it here.

Even more frustrating was the general layout of the game. It’s all too clear that this was not designed for an iDevice, which leads to pounding migraines as you struggle with the awkward portrait orientation and the tiny, tiny, tiny playing area. You have the option of pinch zooming in, but really, that just makes matters worse.

The HD graphics and overall presentation are beautiful, so it’s a pity that you have to squint so hard to see to see them. Game Center and Open Feint integration help round out the experience a little bit, and overall, it’s a much deeper game than your average match-3, but the game is fairly old by now, and this port feels seriously clunky and flawed compared with the likes of Bejeweled 2 or even Call of Atlantis.