BattleZone 3D King of the Hill is a team-based MMO action game using World War II armored tanks roaming around hills blasting the other teams away. Like most massively multiplayer online games, in King of the Hill, you are a signed into the game server and play with and against other players from around the world, so you will need an internet connection to play. You can also choose to practice offline before you go into the online game mode. Pick your team from a nice carousel on the room list page, showing the number of players in each room on each side. A profile page shows your achievements and customizable nickname. Here you can also add a photo from your iPhone to use as your avatar in the game. A news room is there for checking out what’s new in the world of BattleZone 3D. 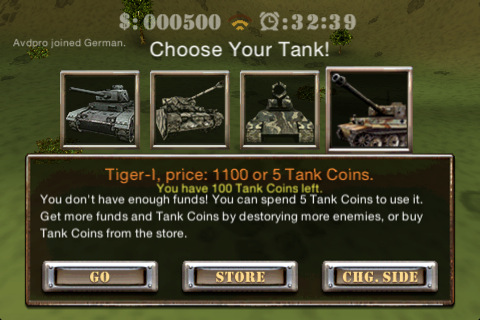 Start out by buying a tank using your opening cash account of $500. Choose from a total of 8 classic armored tanks including the T-26, Panzer-III, KV-2, or Panzer-IV from Germany and the Soviet Union, carefully detailed with historical accuracy. Moving around in your tank is done with a pair of virtual directional pads. On the left your controls are used to move your tank forward, back, left and right. The right pad is used to rotate your tank’s gun up/down/left/right. Your HUD includes camera angle changes, a radar, news updates, fire buttons, a timer clock and money earned. You also have a count of your ammo, and health power. 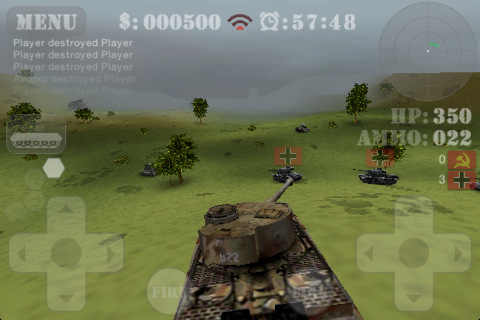 Getting used to the controls can be tricky. Moving around on the grass fields is pretty fun, especially in team mode where you see your teammates and the enemy denoted by country flags. The graphics are 3D, clean and the audio and sound effects are super realistic. More maps could help improve the game’s value. Overall, a pretty fun MMO fighter, and a lot of users are already onboard.

One Comment to “BattleZone 3D King of the Hill”