Breakeroids from coolpowers is an app for the iPhone, iPod Touch, and iPad. This game is a mix of Breakout and Asteroids. Breakeroids is a retro game since the gameplay and graphics feel like something from the early days of gaming. You control a paddle and try to block a ball and make it ricochet onto an asteroid. When an asteroid takes enough hits, it will split into smaller asteroids until it explodes into nothingness.

In breakeroids you have to keep track of the ball, UFOs, where the asteroids are, and the power ups. Move the paddle by sliding and tapping on a location it can go to. Try not to get hit by a UFO’s energy shot or let the ball pass you. 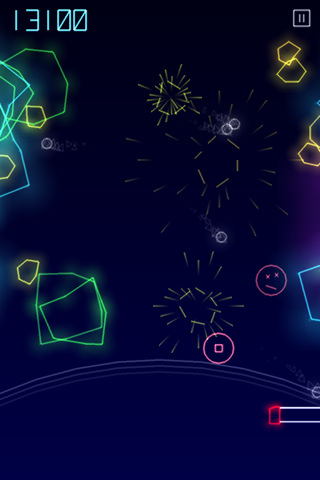 Breakeroids gives you three shields to use as blocks. When you lose all your shields you will most likely lose and have to start the game all over. There is no shield increasing power-up but there are green power ups that help you such as creating three balls on screen, turn into a fireball to break an asteroid into smaller pieces or destroy them in one hit, or slow down ball speed. There are also red power ups that usually hurt you by shrinking your paddle size, increasing ball speed, or making the ball go in random directions. The controls are tight and responsive. Breakeroids tells you how to play the game but does not have a tutorial. There is an achievements and leadersboard feature for this app. The gameplay is fun but could be better.

The graphics in breakeroids are pixelated lines and could be more polished. There are some nice colors despite the fact that breakeroids uses a black background. breakeroids uses particle effects when something explodes. Its amusing to see multiple objects blow up and go off. 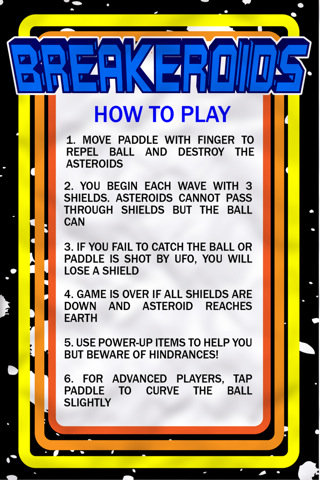 The sound effects are basically made up of a few beats and some explosions. From my experience with Breakeroids, the sound effects and music are the weakest part of the game. It would be nice if coolpowers adds the ability to play your iPod music while playing.

Breakeroids sells for $1.99 in the iTunes App Store. The price would be more suited at a dollar. Breakeroids is a pick up and play game since you can pause and continue whenever you feel like it. The drawback is that if you lose, you have to start at the first wave again. I think Breakeroids is an enjoyable quick-play style iPhone game that tries to bring back the charm of its classic predecessors. The game plays on both the iPhone and iPad as a universal binary.