Music, tapping, and finger eye coordination? Yes dudes and dudettes, Clickgamer.com bring us DJ Nights: Global tour, a tap your butt off, musical, puzzle iPhone game. If you’re a fan of the DJ max series on the playstation portable, this app would definitely be a game to look into.

DJ Nights: Global is a musical puzzle game, that plays just like DJ max portable, except you have three keys and two scratch tables on the left and right. There about a total of twelve tracks that can be played. Each of which has excellent sound quality. 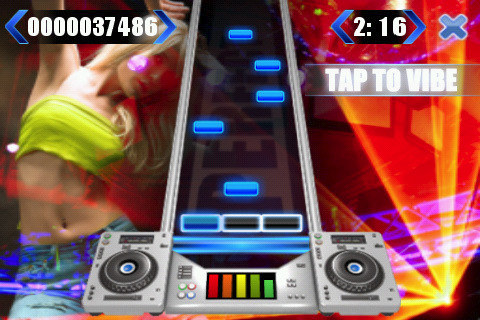 DJ Nights’s sound track is wonderful but feels a bit small when compared to Guitar Hero or Rock Band’s library. There are only twelve songs credited so be ready for that amount when paying $2.99. When playing the songs, it felt long and a bit agonizing. It also felt like I was pressing the same button for a minute. Most of the songs play the same, and when you mess up the song keeps playing normally. This made me feel like I had very little control of the music’s sound. The colors are great though, with enough flashing likes to give any child a seizure, what more can we ask for in a DJ game?

The controls however are what bugged me the most. I wished DJ Nights would have used my iTouch’s full screen capability. This usually made it too hard for me to press two buttons at once. I would press the scratch table on accident or the game would recognize me as hitting another key, because I have fat fingers . I also wish they had more songs, either bought or unlocked in their repertoire. 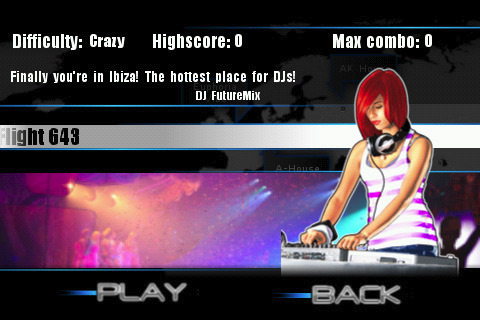 There are only four different selections in the main menu: Tour Mode which is mainly how you unlock new tracks and progress, Play More which is an in game advertisement for you to buy more games, Options, and Credit.

The price is decent, but there aren’t a lot of added bonuses or cookies. However, it does support open feint, so scores are posted which gives it a more competitive feel. It doesn’t support game center however, so multiplayer is not available. If you felt this game was well worth it and want more, there is also DJ Nights: Eurodance and Julie Thompson Ed.

Here is a video demo of the DJ Nights: Global Tour app on the iPhone