Webst Consulting S.A. has combined the best of both old and new by developing a wordsearch iPhone and iPod touch app called Word Search Plus, in which an infinite number of wordsearch games can be created for your puzzler pleasure. Before Sudoku, the name of the game was Wordsearch. Before handheld games, people would compile their puzzles into books, to be brought around and worked on during a lull in their day.

The mechanics of playing a wordsearch game are uncomplicated (and are unlikely to change, after decades of being in place): find hidden words in a grid full of seemingly random letters. Normally you’d circle, highlight, or even draw a line through the word in order to indicate their found status, but on a device with touchscreen functionality, you can simply drag your finger down from the first letter to the last; the game will mark it accordingly. Be careful not to lift your finger off the screen before finishing a word to the last letter, else you’ll have to start over again. With 23 categories, there are thousands of words that can show up in your list of nine given words. You can narrow it down from all categories by choosing one in the Settings. 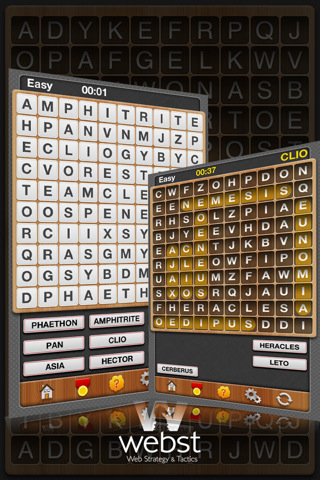 Each game is timed; there are five difficulty levels (Easy, Medium, Difficult, Pro, and Expert), with the last two locked until you can achieve an average time that’s less than or equal to 1.5 minutes in at least 5 games in Difficult. Easy consists of only forward-facing horizontal- and vertically-placed words, while the later levels do evil things like omitting the word list. One aspect of this game app is that the developers chose to add an educational dimension to it: definitions (and even some history) are provided for words in selected categories. After you win the game, just tap on Details to bring up the list of words on your word list that falls under those 12 categories. 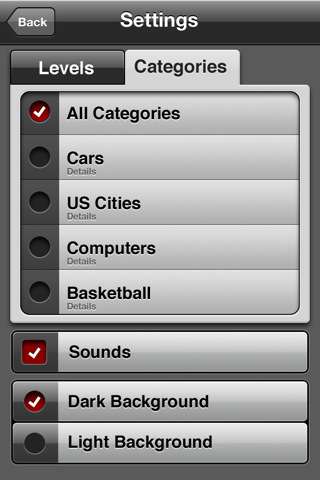 Curiosity is definitely awarded in Word Search Plus, and as a word-nerd, I love the didactic bent that permeates the game. Gameplay is not hard to pick up at all, especially if you’ve done wordsearches before (although sometimes a word just doesn’t want to be marked found, frustratingly enough). However, I did have some problems with some of the ins and outs of the game. First and foremost, I cannot understand why a completely new game is started if another screen is brought up, such as the Help menu or the Settings page (basically, every icon on the toolbar at the bottom). It makes absolutely no sense. I’d also love the option to further customize a word list, please; choosing between all or just one category is not appealing at all. Perhaps I’m too old-fashioned for my own good, but I prefer the tactile sensations of scratching pencil across paper. Other than the potential learning experience Word Search Plus can offer, there’s not much else that allows this app to stand out.

This 3rd Party App is available at the Apple iTunes AppStore. Browse the full list of all AppStore apps filed under the AppStore category.
Download Word Search Plus at iTunes App Store
Price: $0.99
Developer: Website
AppSafari review of Word Search Plus was written by Julie Guan on April 2nd, 2011 and categorized under App Store, Board, Fun, Games, Puzzler. Page viewed 4319 times, 1 so far today. Need help on using these apps? Please read the Help Page.