Released by LambdaMu Games, Infinight is a top-down labyrinth style adventure/puzzle game where you wander through a world cast in shadows. Thunder strikes and giant vortexes have appeared. The world is dilapidated and you can hear whispers in your ear. You play a little girl who woke up in a hospital and you must find out what happened. Infinight is available on the iPhone, iPod touch, and iPad for $1.99 with a free alternative. 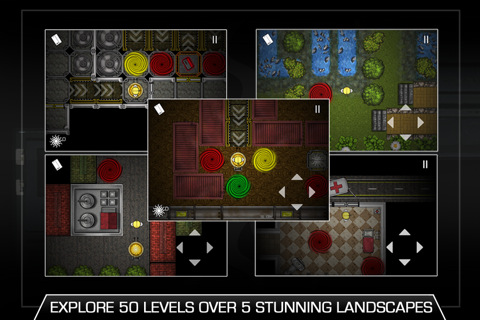 Infinight runs on a memorization puzzle system. In the Hospital, the light flashes and you see these red, and later other colors, spinning vortexes. The vortexes hurt and you can only receive a few hits before you die, so you must avoid these mysterious events anyway you can. As Infinight advances, you’ll start having to light the way on your own so the memorization element grows as you progress.

The art direction strikes me immediately. The mood is dark and quiet with this implied suspense that I can’t quite explain. For much of the game as I moved from level to level, I kept expecting to see a monster or some scary face to pop up and give me nightmares. The atmosphere is excellent. Creepy sound effects help build mood and the small story elements that slowly get revealed in such a way that I felt really motivated to progress.

Controls are extremely simple and easy enough to use. You get one directional pad. The game runs on a square grid system meaning you can’t move diagonally, only up, down, left, and right. This works well because you don’t actually need to move smoothly in a game based on placement memorization. The only real flaw that I feel needs to be addressed is the main gameplay. 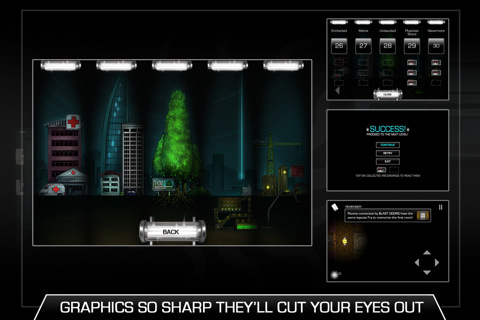 Despite the mood that Infinight sets, the memorization puzzle is a noticeable frustration. You literally cannot see the hazards until you light the area. That said, the fact that you have to wait for very random lighting strikes makes the first stage slow for no good reason. Granted, it did set up a great mood of not really wanting to see what will appear when the lights turn back on, but in terms of actual gameplay, it’s less than inspired.

I would love a mechanic where I could control when the light turns on. Maybe a feature where you tilt your phone and the different portals are only visible from different angles? This is an app filled with potential. If you swap the portals with horrors and scary images, you’ve got yourself a new app. Seriously, try Infinight. The atmosphere, music, lighting, environments, user interface, and overall story are absolutely wonderful. The gameplay is a passable 3/5 that improves in the later stages to a 4 so give the game a try, have some patience and you might find a genuine diamond in the rough.