About a few months back I was searching for music puzzle games to review. After awhile of thinking, Lumines came in mind. Lumines was one of my favorite music puzzle games for the PSP. Although the sequel didn’t feel as great as the first one, the sound track was still great and wonderful. I quickly typed “Lumines” into the App Store search and found a lite Lumines app. It was everything I remembered in high school when I snuck my PSP around during lunch. There is an option in the lite version that would let you download the full version for $2.99 but unfortunately this didn’t work, the app was too old and I guess Touch Fusion either just stopped hosting or updating it. Still being desperate, a week ago I tried to download it using the iTunes program on my computer and not the iPod Touch app, I so normally use. HAZZAHHH!!! IT WORKED. My journey to review one of my favorite games begun. 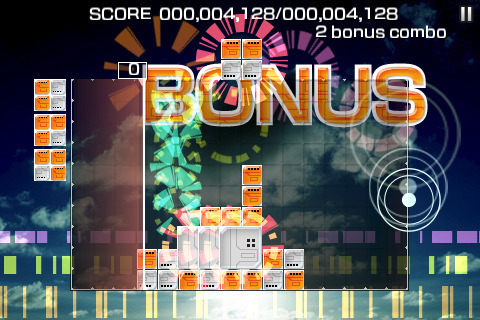 Let us get started with the basics, for those of you who are new to Lumines, this is how it goes. Lumines is musical/puzzle games were your goal is to eliminate blocks by creating squares. What makes this game so unique is the music that is played. Every move that you make, every rotation along with combos will match the music. To make it short, the syncing of color and sound is what makes Lumines such a unique app and game.

For those of you that was or hopefully still is a fan of the Lumines series, this is definitely a game for you. It’s even more portable now that it’s available for the iPod instead of that huge psp. The game play is still the same, and the music is still that trance music I so remember and love. The only thing that really got to me was the controls. 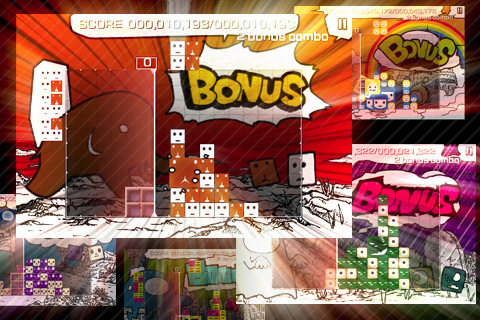 I understand that this is a touch screen and all but this really made it hard for me to play when the game got more difficult. In the psp version you can easily control where and how to place each block in less than a second. Now having to swipe it really reduces accuracy. Sometimes I would accidently swipe it a little too diagonal and the block would go flying down. This was a little irritating when you are trying to get a 20+ combo going.

There are also many different game types including single lap, endless lap, 60, 120, and 180 seconds. All which can be unlocked after either completing the previous our achieving the required score. It also looks like there can be multiple skins that can be purchased but I don’t know how that would work judging how hard it took me to find and purchase the game.

So what is my final verdict? The game is amazing. I am so happy I found this game. For the long time Lumine fans would definitely love this game. And if you never heard of Lumines but you are into puzzle games and music, look it up on iTunes. The price is a bit above average but Lumines is loaded with unlockables and skins, if that is you can still purchase them in the App Store. For 2.99 I would but it before a heartbeat.