Have you ever found yourself struggling to decide between playing a platformer app and a “match three” game? Well now that decision has been made easy thanks to a new iOS game from Colorbox called Candy Boy. Candy Boy is a unique iPhone game that encompasses traditional elements from both the platforming genre and the match three puzzle genre. Has Colorbox found a perfect combination of two classic gaming genres?

Candy Boy follows the adventures of Casper, a candy maker who one day finds his Candy World in chaos as it’s being eaten by worms that eat candy. Admittedly, there isn’t much of a story here, which is something a good platformer needs. However the lack of a proper story is countered by the presence of one of the most interesting game mechanics I’ve seen in an iPhone game to date. As we all know, a traditional platformer involves going from point A at the beginning of the level to point B at the end of a level and typically the level scrolls as the character moves from left to right (earning them the name “sidescrollers”). Most “match three” games on the other hand feature an endless or near-endless supply of colored gems or balloons and the object is to move pieces of the same color next to each other to eliminate pieces on the board. Candy Boy, on the other hand, features a nearly static level design in a similar fashion to other casual puzzle games (like Angry Birds), which challenges players just to get from one side of the screen to the other and collect all three coins along the way. This is done by placing colored blocks alongside of blocks on the map blocking your way to the finish. 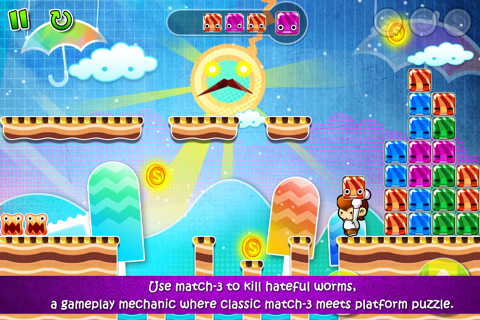 If you place like-colored blocks beside each other, they’ll disappear and allow you to proceed to the finish. As interesting as Candy Boy’s gameplay is, the controls leave a little to be desired. Casper is moved by a left and right arrow in the bottom left corner of the screen, and a jump arrow on the right side. A fourth button drops the candy you’re currently holding, though placement is sometimes an issue. Occasionally you’ll have to drop a candy while jumping which is often tough. I would have liked to have seen this mechanic work a lot more smoothly to cut down on the number of failed levels because of inaccurate drops. But while the controls are sometimes aggrivating, the visuals are absolutely spectacular. With bright, fun colors and a style reminiscent of Paper Mario, Candy boy is always a joy to watch. 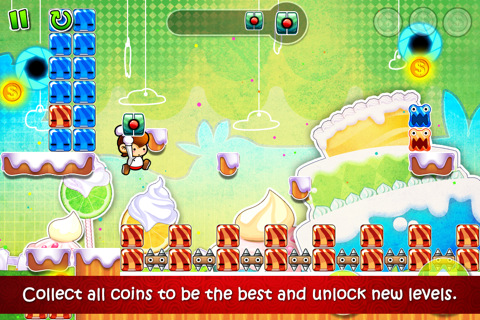 Offering more than 100 levels, catchy visuals, and a unique combination of game styles Candy Boy is a game that was a real pleasure to play. While far from perfect, the sheer unique gameplay is enough to make Candy Boy a title to add to your iPhone’s game collection. Candy Boy is available now in the App Store for 99 cents.