The Temple Run application, which is an iPad, iPod touch and iPhone app in a single package, launched with an MSRP of $0.99. The App Store now offers it free, which means there’s no reason for you not to download and experience this game. Temple Run is an Indiana Jones-inspired interpretation of the “endless runner” genre by Imangi Studios. It’s fun and unique, and it will captivate you.

A big part of what distinguishes Temple Run is the third-person chase view. As the player, you’re sitting at a 45-degree angle to your avatar who must navigate tight passages and various pitfalls. The reason this view works so well is that it doesn’t reveal what’s around the corner until it’s almost too late, and that lends the experience a charming and highly enjoyable sense of urgency. Temple Run isn’t the first endless runner to employ this view, but Imangi Studios manages to overcome the usual drawbacks. 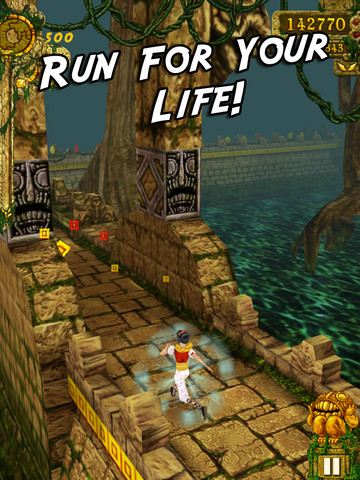 The developers made an interesting choice for control as well. Rather than use the standard one-button jump, this application takes advantage of the touchscreen: swipe up to jump, swipe down to slide, and swipe either left or right to turn. The controls are very responsive and surprisingly nimble, and using this control system, players can still play one-handed, at least on the iPhone and iPod touch. The controls do take a little getting used to, but once you have it, it feels very natural.

Generally, a free/$0.99 app has limited longevity, but that isn’t the case here. Temple Run manages to stay fresh, even after you beat the game once, because it randomly generates all levels. With games like this, random level generation can be a mixed bag. Fortunately, the Temple Run generator is quite smart, and in all our play testing, it never produced a broken level. And this design approach provides each Temple Run play-though with a real sense of adventure. 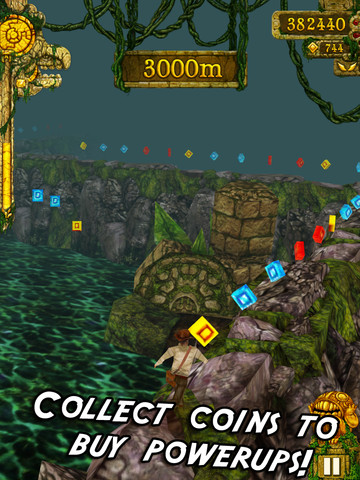 Temple Run also reacts to tilting. As you move along the pathways, there will be coins to either side of your avatar. By tilting in the appropriate direction, the avatar will pick up the coins. It might seem like too much to handle when you first start playing. Later, picking up those coins will become an enjoyable part of the process, and you can accrue enough coins to unlock power-ups, such as invisibility.

Temple Run even has GameCenter integration including a leaderboard. Our one gripe is that players can actually pay cash to increase their coin total. Why anyone would do that, we don’t know. But they do, and that makes the leaderboards a lot less useful. As for the iPad versus iPhone app conundrum, try it both ways, and see which you prefer. The bigger screen is nice in one sense, but Imangi Studios made this for the iPhone, and it really works well as an in-the-palm-of-your-hand gaming experience.